September 4, 2013 By Fleur in her World in Book Reports Tags: Natasha Solomons 3 Comments

The year was 1958, and Juliet Montague was turning thirty. She’d planned to be sensible, to go out and bring home the new refrigerator that she had been saving hard to buy. But Juliet had always had an eye for art, and on the way to the shops she spotted a young artist, Charlie, at work. She asked to buy the painting; he wouldn’t sell it, but he offered to paint Juliet instead. A much better present! 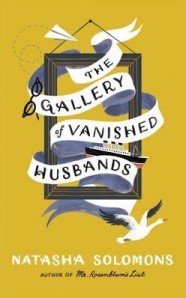 It wasn’t the first time that Juliet’s portrait was painted. The first time had been when she was just nine years-old. But her husband had taken that portrait – and one or two other things of value – when he abandoned Juliet and their two children.

And, because Juliet came from a strict Jewish community, that made her an ‘aguna’ – a woman who is still a wife, and will always be a wife, unless her husband can be traced and persuaded to grant a divorce.

But Juliet’s second portrait heralded the start of a new life. She was pulled into the circle of a group of young artists, ready to open a new gallery to showcase their work, and eager  for Juliet, whose instinctive understanding of art they greatly appreciated, to run it for them. It was a whole new world, and Juliet loved it.

But Juliet’s traditional, conventional, parents don’t understand. They are good people, they love their daughter, and they have the means to help support her and their grandchildren, but they fear for their daughter.

She moves between her two worlds – belonging and yet not belonging in each of them – and knowing, but not quite admitting, that she can’t be at peace until she learns her husband’s story.

Natasha Solomons writes beautifully, with a wonderfully light touch, and she catches people, places, emotions, quite beautifully. I appreciated that she shared a great deal of understanding of the Jewish community, and Juliet’s position, without in any way making this a book about issues. It’s a book about Juliet’s life, her relationships, and her emotional journey.

I particularly liked the way that the impact of the family situation on Juliet’s son and daughter was illuminated at different points of the story. And the way it was shown that times, relationships, everything changes.

The structure is interesting: each section begins with the catalogue number and title of a different portrait of Juliet, and spins a story around that time of her life. That made things a little episodic, but it was only a problem at the end of the book, when the story jumped forward quite a few years.

Those things, the slight fuzziness that they give the story, make me inclined to say that this isn’t as good a book as The Novel in the Viola – which I loved – but it is very readable, and emotionally engaging. I appreciated that it was a very different story, set in a different world and at a different time.

The Gallery of Lost Husbands is a quiet story, a story of a life being lived. There are no big dramas, but the important moments, when something happened or when realisation dawned, were captured beautifully. You could say that it’s a very grown up light read …