September 2, 2013 By Fleur in her World in Book Reports Tags: Elizabeth Cadell 6 Comments

Elizabeth Cadell’s books kept popping up on lists of recommendations, and when I did my research I was disappointed to learn that they were all out of print, because they sounded lovely. But luck was with me: I spotted a very pretty edition of her 1966 novel ‘The Corner Shop’ and I pounced. 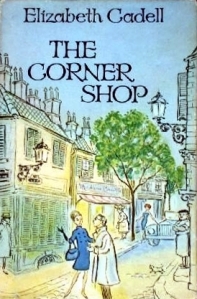 I quickly found myself very taken with the heroine, with a wonderful adventure, and with a fine romance.

Lucille Abbey was an attractive young divorcee, and she was the owner of a successful secretarial agency. She was bright, capable, confident, charming, and adept at dealing with whatever difficulties life might throw her way.

On her way to her annual holiday – a busman’s holiday, looking after her aunt’s little shop in Paris – she made a detour to sort out a little business problem. Lucille had sent three of her most capable secretaries to carry out a seemingly simple job at a professor’s country home, and all three had given up, so Lucille decided that she would have to deal with the situation personally.

Lucille realised that the professor was oblivious to practicalities, but she explained, clearly, charmingly, and firmly, what she needed and why she needed it, and she got the job done. By the time she was finished Lucille and the professor were getting on beautifully, and both were enjoying the novelty of having a bright, quick-thinking, sparring partner.

There were one or two mysteries that Lucille couldn’t solve – the mystery of the lady visitor who was sure that her missing china was at the professors house, and the mystery of the professors’ mothers missing paintings, that seemed to be attracting an extraordinary amount of interest – but her job was done, and it was time for her to be off to Paris.

Lucille found that things had changed since her last visit. He aunt had acquired a new, bigger shop, and was planning to move after her holiday. Lucille had already suspected that her aunt wasn’t as hard-up as she had always claimed, and that she could have easily paid for someone to look after the shop while she was away. But there was a touch of the workaholic about Lucille, and that didn’t have too much in her life outside work. She was wonderful, but she was fallible.

And then the plot got very complicated. There were dubious goings-on in the new shop. There was an unexplained gift – a glittering starfish brooch. And it seemed that they mysteries of the paintings and the china had come to Paris too. The professor wasn’t far behind. Coincidences abounded!

There was a lot of running around in Paris then, and the plots got very tangled. At times it seemed a bit of a mess, but it was a very entertaining mess.

The personalities are deftly sketched with a light touch, the dialogue sparkled, and the story read beautifully. It was fun!

But I do wish it had stayed in England, because things fell apart in Paris. It stretched credulity too far when all of the plot strands converged there. There were possibilities that were unexplored, and there were characters who had potential that were allowed to slip away.

The mysteries were all tied up in the end, but the knot was rather untidy; it was a resolution but it wasn’t quite right. The romance, on the other hand, played out exactly as I had expected and exactly as I wanted.

The Corner Shop has it’s faults, but for all of that it is a lovely light read, full of entertainment, intrigue, romance, and charming characters.

I shall definitely be on the look-out for more of Elizabeth Cadell’s books!