August 29, 2013 By Fleur in her World in Book Reports Tags: Louise Candlish 3 Comments 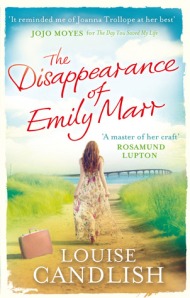 That title, a lovely cover, and an intriguing post caught my eye and I decided, even though I wasn’t sure it would be my kind of book, that I should read ‘The Disappearance of Emily Marr.’ And now that I have read it, I’m very glad I did.

Tabby Dewhurst had been travelling with her boyfriend, but they had parted company, her funds had run perilously low, and she was managing as best she could. She didn’t want to go home – there had been losses and there had been bridge-burning in her past – she just needed to get back on her feet again.

When she was passing through Ile de Ré – a holiday destination favoured by the wealthy, set just off the coast of France – and wondering where she might stay for the night – she saw a woman leaving a cottage carrying a suitcase, and heard her saying the numbers out loud – in English – as she worked the property’s digital lock. Hardly believing her nerve – but knowing that she hadn’t enough money to pay for a place to stay, and telling herself that she would just rest for the night and do no harm – Tabby entered the cottage.

But then the woman she had seen leaving the cottage – Emmie – came back. She was horrified to find Tabby there, but as soon as Tabby explained herself she welcomed her with open arms. She offered her a room for a nominal rent, she found her a job, with an agency that looked after second homes and holiday lets. It seemed that they were kindred spirits, and that they were becoming close friends.

Tabby told Emmie everything, but Emmie told Tabby nothing. And that made Tabby curious. She did some digging and she uncovered the story of Emily Marr.

Emily Marr worked in a pottery, she loved vintage dresses, and though she and her long term-boyfriend were splitting up they were still good friends. She made a mistake – a mistake many young women make – she fell in love with the wrong man. A married man. She thought that everything was going to fall into place, but something went terribly, terribly wrong, and Emily paid the price. It destroyed her life.

The two stories ran in parallel.

I loved Emily, and her story was heart-breaking.

I liked Tabby rather less, particularly as I watched her looking through the owners’ possessions and entertaining her married lover in the properties she looked after, and looking for clues about Emmie’s past in her cottage whenever her back was turned. But I was curious to find out what she found out.

The first twist I saw coming. It was good, it was right, but I saw it.

The second twist was stunning. It came out of the blue, it turned everything on it’s head, and it took this story to a whole new level.

I found myself turning the pages more and more quickly, wanting to find out how things played out. They played out beautifully. And the story works on two levels: you could read it as a wonderful entertainment, a story of secrets and scandal, set in two lovely locations; and you could read it as a story of the iniquities of modern life, of infidelity, of family breakdown, of trial by tabloid …

There are some lovely details, and I particularly loved the way she threaded similar themes through Tabby’s and Emily’s stories. They worked together very well. There were moments when Tabby’s story seemed to drift, maybe because it wasn’t as strong as Emily’s. And there were practical points I might question, but the story rang true emotionally and psychologically.

It captured me with a wonderful opening, that foreshadowed later events, and it held me until a beautifully judged ending, that answered some questions and left others for me to ponder …