August 15, 2013 By Fleur in her World in Book Reports Tags: Helene Wecker 7 Comments 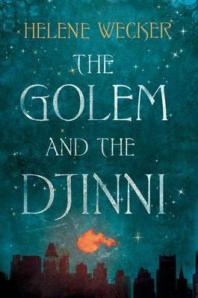 There are so many wonderful things in the book that I really don’t know where to begin. There are the two magical creatures of course. Folklore, from two very different cultures. Questions about how we should live. The journey from the old world to the new. Questions about what makes us human. The immigrant experience in America, as the nineteenth century drew to a close.

And the most wonderful thing of all is that Helene Wecker has made them all work together, in a story that is beautifully written and utterly readable.

Two magical creatures, in human form, were adrift in New York in, 1899.

The golem was new-born, created from clay in the old world,  to serve her master when he sailed to a new future in a new world. He asked that she be made obedient, virtuous, practical and intelligent, and she was all of those things. But her master died on the journey, and she found herself alone in a strange country.

It was fortunate that somebody who recognised what she was found her, and helped her. He made her realise that it was better that others didn’t find out what she was, that she was different. Sad maybe, but understandable. That was difficult when she was so much stronger, so much brighter, so much more capable than those around her. And the thing she struggled most was something that mortals lack – an ability to sense the wishes of others and an instinct to satisfy those desires …

The djinni was born of fire, centuries earlier, but he had been imprisoned in a flask for centuries. He was released, by chance, by a tin smith, but he wasn’t completely free. He was trapped in human form by an iron band around his wrist. He was arrogant, impatient, set on going his own way, but he could also see the sense of the tin smith’s advice to fit in with the community around him. He remembered much, but not enough, and he could not break the iron band.  But he could enter the dreams of humans …

The golem and the djinni, opposites in nature, were drawn together and recognised they have something in common. That they are both outsiders, both different. they could complement each other or they could clash horribly …

Meanwhile an old man – the golem’s creator – was coming to the end of his life, he felt that he should put things right, that he should be able to account for his life and his actions. And so he sets sail for the new world, to find out what had become of the creature he created. His history and his journey pull the different strands of the story together.

The storytelling is lovely, and the plot is cleverly and intricately constructed. I appreciated the prose and a wonderfully light touch. There were so many themes, so many ideas, so many strands, and they all worked together beautifully. The times, the places, the people, all came to life on the page.  I was drawn in, I cared, and I was held from the first page to the last.

Best of all, the story of the golem and the djinni spoke profoundly of humanity, of its strengths and weaknesses, and of what it is that makes us human.

It is a remarkable debut, a story that speaks to the head and to the heart, and I know that I will go on thinking about it for a very long time.

Thank you Love Reading, for my copy of The Golem and the Djinni.