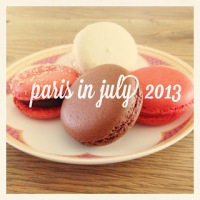 Paris in July is coming around again, and I thought it would be nice to look back earlier Julys spent visiting Paris through books and music,  and to look forward to some lovely possibilities for this July.

Do you have plans?

I have plans, ideas, and memories, and I’ve put some of them into an A to Z.

It’s not comprehensive, but sometimes I like to just throw a few lovely things into the air …..

B is for Bel-Ami. I read Guy de Maupassant’s novel for Paris in July last year, and I can happily recommend it to anybody looking for an accessible classic with themes that are still relevant.

C is for Colette. I read ‘Gigi‘ for Paris in July two years ago, and there’s a second novella – ‘The Cat’ – in my edition that I still haven’t read.

D is for Dumas. One day I will read ‘The Count of Monte Christo’, and I may even make a start this July.

E is for The Emperor of Paris. C J Richardson’s first book was charming and so I have this new one – about a romance between a bake and a lady who restores paintings in the basement of the Louvre – on order at the library.

F is for Flowers. That was the song from Emilie Simon that I picked out for Paris in July last year, and I have another lined up for this year.

G is for Gallic Books, where you’ll find a wonderful selection of books set in Paris. The President’s Hat and The Confidant are two I can happily recommend.

H is for Harris. If I could only recommend one book for Paris in July it would be Paul Gallico’s ‘Flowers for Mrs Harris’, also sometimes known as ‘Mrs Harris Goes to Paris.’ The story of the char woman’s quest for a Dior dress is charming, engaging, and I can’t think of any writer who does bittersweet quite like Gallico.

I is for Imogen Robertson. As I read of the adventures of women artists at the turn of the century in ‘The Paris Winter’, I thought it would be perfect for Paris in July.

J is for Jules et Jim. I could read the book or I could watch the film. I might even do both …

K is for Katherine McMahon. I left ‘Season of Light’, a love story set in during the revolution, behind in the library thinking I would save it in Paris in July. Hopefully I’ll spot it again and be able to bring it home.

L is for Liberty by Lucy Moore: the real lives of six women who lived through the French revolution.

N is for Nancy Mitford, who lived in Paris and wrote non fiction about The Sun King, Madame de Pompadour and Voltaire in Love.

O is for Olivia Ruiz. I have one of her duets lined up to provide a musical interlude in July, but for now this is really cute.

P is for Père Goriot. It’s on my Classics Club list, it’s set in Paris, and I’ve been meaning to read Balzac for ages.

Q is for Quartet. I think I’ve read all of the novels and short stories of Jean Rhys, but now her books are calling me back again. Quartet is one of several set in Paris.

R is for The Red and the Black by Stendahl. The Classics Club Spin spun me this French classic, but  with ten days left I’m only five chapters in, so I might give up or I might still by reading in July,

S is for Summer Will Show. I try to find a Virago Modern Classic for every reading project, and Sylvia Townsend Warner’s  ‘Summer Will Show’ is a definite possibility for Paris in July.

T is for A Terribly Strange Bed. A very recent discovery: that bed is in Paris an Wilkie Collins wrote about it, in a novella that I really want to track down.

U is for The Umbrellas of Cherbourg. It’s not qer-comments%2Fimages%2Fwploge Deneuve in a beautiful, romantic, sung-through French musical. Heaven!

V is for Voilà by Jehanne Cheral. Just in case you missed it a couple of days ago: a catchy song and a bookish video.

W is for The Man Who Walked Through Walls, who appears in the title story of an intriguing collection by Marcel Aymé. It’s nearing the top of my library pile.

X is for Xavier-Marie Bonnot. I thought this was going to be an impossible letter, but I was saved by a French crime-writer.

Y is for Yvonne Arnaud. A French born singer, pianist and actress, and the godmother of Persephone author Oriel Malet. Who wrote a little book called Marainne as a memoir of her grandmother. It’s lovely, but sadly it’s fallen out of print.

Z is for Zola. I’d definitely going to read something by Zola in July. I’m not sure which book, but at the moment I’m leaning towards ‘Nana’.