Take a coming of age story, a pony book, a boarding school story. Twist them together, with a dash of period style, and you have The Yonahlossee Riding Camp for Girls. 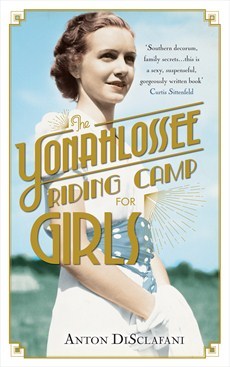 The story begins with fifteen-year old Thea Atwell being sent away from her Florida home for the first time, to an elite establishment, set high in the Blue Ridge Mountains of North Carolina. A finishing school for wealthy debutantes, who lived in chalets, who were waited on by maids, and who spent their days riding and perfecting their equestrian skills. Heaven for the right girl. But Thea, who had never been away from home before who hadn’t wanted to leave her beloved horse, Stasi, knew that she was being punished. And she knew that she deserved it.

As I learned for about her history, I realised that she was probably right. Thea and her twin brother, Sam, grew up in a grand house, set in the middle of a thousand acre estate. They were educated at home, by their father, and they spent their days roaming the estate, Thea riding and Sam observing nature, which fascinated him. They never saw anyone outside the family, and that made them very close. Their only friend was their cousin Georgie, who visited from time to time with his parents.

Thea was such a fascinating character. She was bright, confident, and passionate; but she was selfish, thoughtless, and heedless to the consequences of her actions. I couldn’t in all honesty say that I liked her, but I was intrigued by her, I wanted to know more about her past and her future, and I saw that her character was very much the result of her upbringing.

She struggled at first. With the curiosity of the other girls, who wondered why she had arrived without warning.  With the knowledge that while her family was well of by Florida standards, others had far, far more. And with a school that put far more emphasis on etiquette and equestrianism than academic study.

But she adapted. She made friends, she began to enjoy the lifestyle, and she knew her riding skills would put her in contention for awards. That made her an enemy….

Thea was at a turning point in her life, and the world was changing. The 1920s were drawing to a close, the depression was looming, and maybe the time for establishments like The Yonahlossee Riding Camp for Girls was coming to an end. The story of the girl and the story of her world worked together, and echoed each other, beautifully.

I was pulled into Thea’s story by lovely, lovely writing, that carried echoes of the writing of the period even as the story touched on themes that the writers of the period would have passed over. She drew me into a world that was fully and quite beautifully realised. And, though I’m not at all horsey, I found it easy to understand Thea’s passion.

Her other passions were more troublesome, and I feared the consequences of many of Thea’a actions, feared that maybe she was repeating the mistakes of the past.

At first the story seemed quiet, little seemed to be happening, but I was caught up and I turned the pages quickly, eager to find out what had happened in the past, and what would happen in the future. I worked out some things, but not all of them.

I was just a little disappointed that certain characters, and their motivations, weren’t as fully realised as they might have been. And I was left with one or two unanswered questions.

But Thea was such a wonderful character, her voice rang true, and I loved following her through a defining period in her life.

That’s what I’ll remember about The Yonahlossee Riding Camp for Girls.