Never has a title captured a book more perfectly.

SUNSHINE SKETCHES OF A LITTLE TOWN!

I found that sunshine in a small, tatty orange Penguin book, but it’s not at all photogenic, and so I went trawling for images and I was delighted to find that there’s a lovely smart new edition out there. 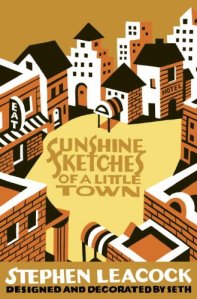 I didn’t know who Stephen Leacock was when I spotted my little book but his name rang a bell, and when I investigated later I found that he had a place in Simon’s 50 books you must read but may not have heard about. That was a very good sign.

A little more research uncovered the fact that Stephen Leacock was a teacher who tried a little writing, with a little humour, to supplement his salary. And that he was so successful that a medal for humour bearing his name has been presented for nearly seventy years now. Another very good sign.

But there’s no better research than reading, and so I read!

The twelve sketches tell stories set in the fictional town of Mariposa. It might be based on one particular town, but it’s presented in such a way that it could be any number of towns, and there are many things that will strike a chord with anyone who has lived in a small town pretty much anywhere. It did with me.

There are stories of people. Let’s introduce a few of them:

There’s Mr Smith, proprietor of Smith’s Hotel, a man perfectly suited to the business of hospitality. There’s Mr Thorpe who is a successful speculator but knows that he is still needed as the town barber. There’s Dean Drone, who loves the classics but has to lift his nose out of his book to deal with church finances. There’s Peter Pukin, a bank teller from out of town, who is besotted by the judge’s daughter, who is far too caught up with dreams of romance to even notice his existence …..

They are introduced with a very natural humour, the humour of a good raconteur who knows to tell his story with warmth and wit, pointing out all of his characters quirks and foibles, and maybe exaggerating them just a little bit. It was evident that he knew and loved them.

There are stories of events too, and these have a richer vein of humour. And, I suspect, rather more exaggeration.

A bank raid where a man is killed. Or maybe seriously injured. Or maybe a bullet just whistled past his ear ….. A whirlwind campaign that the town isn’t quite ready for ….. And best of all a boat trip that ends with a sinking in less than six feet of water and a daring rescue by the town’s lifeboat crew ….

I don’t often fall for comic stories, but I fell for these hook line and sinker.

But writing about them or pulling out quotations really doesn’t seem to work. You need to read one. And once you’ve read one you’ll probably want to read another and then another, until you’ve read all twelve.

There are plenty of old editions out there, the book is in print, there’s a free download, and it’s short.

So if you like the idea of Sunshine Sketches there really is no excuse ….