May 23, 2013 By Fleur in her World in Book Reports Tags: Suzanne Rindell 12 Comments

The Other Typist is a wonderful entertainment, a real page-turner, set in 1920s New York, in the age of prohibition.

Rose Baker tells the story. She was raised in a convent and had to make her own way in the world. She worked for the police, as stenographer and typist; she rented a room in a boarding house; and she took a great pride in her moral code and her emotional control.

She was living, but she didn’t really have a life.

Everything  changed when a new typist was hired.

“On that particular day, she entered very calmly and quietly, but I knew; it was like the eye of a hurricane. She was the dark epicenter of something we didn’t quite understand yet, the place where hot and cold mixed dangerously, and around her everything would change.”

Odalie was charismatic, fashionable, modern, and the whole department was quickly won over by her.

Rose’s feelings towards Odalie were complex: a horribly recognisable mixture of fascination and jealousy. She wanted to be friends, to have everything that she knew would come to her as a friend of Odalie, but she wouldn’t make the approach, she wanted Odalie to come to her.  And, in time, Odalie did. 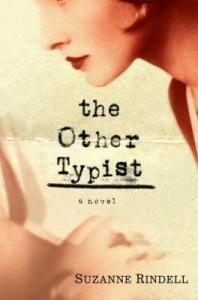 Rose helped Odalie at work, and Odalie introduced Rose to speakeasies, loaned her lovely clothes,  and even invited her to share her apartment. Rose didn’t think to ask why Odalie wanted to be friends with her,  or why Odalie was working for the police department when she seemed to have the world at her feet and money to burn …

There was, of course, a very good reason …

It wouldn’t be fair to say more, but this book had me asking questions from the first page to the last, and I just had to keep turning the pages. I really wasn’t sure if Odalie was playing Rose, or if Rose was playing Odalie. Certainly Rose was an unreliable narrator, but whether she was a foolish woman whose head was easily turned or a dishonest woman out for whatever she could get I really couldn’t work out.

There were so many reasons to keep turning the pages: a wonderful evocation of the time and place, a wealth of period details, intriguing characters, and a very cleverly constructed plot that dangled intriguing possibilities if front of me and kept me asking questions.

It worked because, though the story was colourful, it was psychologically true, the characters and their actions were utterly believable.

And it worked because I realised from the start that Rose was telling her story after something momentous, something else that had change her life happened.

Something momentous did happen – the ending was stunning. I read it, I read it again, and then I had to rethink everything that I’d read before.

Thank you Love Reading, for my copy of The Last Typist.