Oh what  a maddening book!

Maddening because there were glimpses of greatness, glimpses of what could have been a seminal work, but I wanted so much more than glimpses.

Francis Marion Benyon was a farmer’s daughter, born in 1884, who grew up to be a journalist, a suffragist, a pacifist, an activist …

This is her only novel, and it is clear from the start that it contains much that is autobiographical.

“I am coward. I think I was born to be free, but my parents, with God as one of their chief instruments of terror, frightened me into servility. Perhaps I owe it to the far horizons of my Canadian prairie birthplace; perhaps to the furious tempests that rocked our slim wooden dwelling, or it may be to the untrammelled migration of birds to distant lands that the shame of being a coward had survived their chastening. I know that these things have always beckoned to something in me that vainly beats its wings against the bars of life.”

Aleta Day was reared by parents who set out to “break her spirit” but she survived, and she tells the story of her childhood beautifully, and with an understanding of its consequences that is truly moving. She learned that appearances were everything, that she could be quietly subversive. And at school, when her friend Ned questioned the English version of history that they were taught, she learned to question everything. She grew up to be a journalist, a suffragist, a pacifist, an activist. 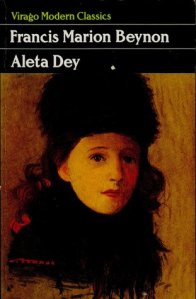 But I missed seeing Aleta grow from a child with ideas to a woman with convictions, because the story took a big leap forward.

Aleta Day fell in love with another journalist. A conservative journalist, a heavy drinker with an estranged wife and a young adopted son. They argued but they were happy. He went to fight in World War I and Aleta went to fight for her pacifist ideals. The ending would not be happy.

I was charmed by Aleta; she was warm, she was thoughtful, and she was so considerate of those she loved. She was prepared to live with her beliefs and accept the consequences, but she was also prepared to accept that she could be wrong. Not a coward at all.

She should have been the heroine of a seminal work, and Francis Marion Benton clearly had the experience, the understanding, the writing talent to make her that.

But the experiences that shaped her beliefs are missing. Much of what was happening in the world around her is missing. And sometimes one story of a life, an experience, an incident, says more than any statement of principle, however eloquent the statement, however right the principle.

It isn’t that this isn’t a good book. It is. I just wished it could have painted a more complete, more rounded, account of the life of Aleta Day, because if it had it might have been truly great.