May 16, 2013 By Fleur in her World in Book Reports Tags: Joanna Rossiter 2 Comments

In ‘The Sea Change’, Joanna Rossiter spins her story around a mother and daughter, both caught up in life changing events – real, historical events – that are very different and yet have similar consequences.

She does it so very well that I can scarcely believe it is her debut. But it is. 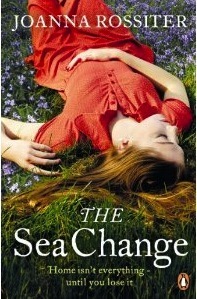 In 1971 Alice was travelling across Asia to India with her new boyfriend. When they reached India they married, but the very next day they were separated by a tsunami. As Alice desperately searched for James she had she thought about their past, their relationship, their journey. And she thought about her mother. Her instinct was to turn to her mother, Violet, but they had parted on bad terms.

In 1943 Violet’s home, and the whole Wiltshire village of Imber, was requisitioned by the army. She had never returned but she had never forgotten her home and the people who were lost to her now: her sensitive, caring father; her practical mother; her spirited sister, Freda; and Pete, the troubled young man she had been drawn to. They were all lost to her now.

The same themes – home, love, loss, misunderstanding – are threaded through both strands of the story.

Joanna Rossiter writes quite beautifully, in fluid, graceful prose, and she illuminates characters, places, relationships, in all of their complexity, so very well.

And she writes with such intelligence and understanding, leaving space for her readers to wonder, to interpret, to think, to react.

I was completely caught up, though I was torn between wanting to rush forward with the story and wanting to linger to appreciate so much that was wonderful.

The movement between 1940s England and 1970s India felt quite natural, and the two places were brought together by recurring themes and images. The descriptions are rich, the sense of place is strong, bringing landscapes to life and making the destruction of those landscapes, by man and by nature, devastating.

All of that could have overtaken the characters and their stories, and yet it never did. They were utterly real, complex, and fallible. I cared, I wanted to intervene – particularly to bring mother and daughter together, to make them talk, to help them understand each other – but I couldn’t.

I could only watch, utterly fascinated.

And for all that the two storylines are linked, for all they work together, each has its own character. The balance between incidents and emotions is different, Violet’s leaning towards the former and Alice’s towards the latter. At times I preferred one to the other, but each one was always compelling, always moving.

The tone at times is elegiac, and story is haunting.

After a debut like this I am finding it very easy to imagine Joanna Rossiter becoming an established author, whose new books welcomed with open arms.