You might be wondering who Pip is? And what’s all this about a silver jubilee?

Well Pip was the border terrier of the house here before me. And she was born on 17th April 1988 – twenty-five years ago today – and so we thought that today would be a good day to tell you a little bit about her. 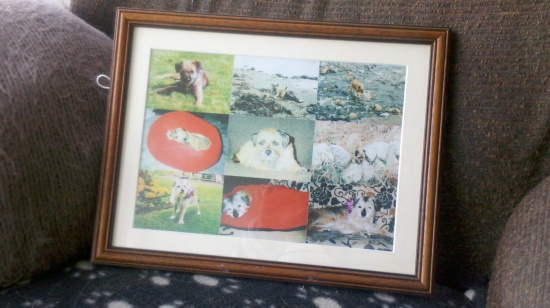 Pip came to live with Jane’s Mother and Father, just after Mother took early retirement. They lived in a bungalow on the other side of town from where we live now and Pip had a lovely house to live in and a big garden to patrol. Sometimes she got through the hedge and patrolled next door too.

Her favourite things in the world were squeaky toys and she could get a squeaker out in less than twenty-four hours. And her best friend was Penny, a very nice beagle who lived with Jane’s godmother. They used to go out walking together, near Perran where Penny lived, every Tuesday afternoon

Jane lived in London then, but she came home quite often and she played with Pip and took her out to different places. Pip wasn’t a beach dog like me. Her favourites were Rosehill, Love Lane, and Hayle Towans. And she really loved going to the Isles of Scilly on holiday.

Pip looked after Mother when Jane’s father died. She made sure that she got up and that she went out and about, and she kept her company and listened. They were very close.

They moved to the promenade because Mother wanted to be nearer the town and her friends once she was the only human in the house.

Mother and Pip were both very happy when Jane came back to Cornwall to live. And when Mother began to get frail Jane took change of Pip’s catering and socialising.

But in time Pip got very frail too. Jane looked after her, and the vet was a lot of help, but in the end it was Pip’s time to go.

Jane and Mother knew that Pip had a lovely life, that she was a very old dog, but they missed her very much. She was a lovely, lovely dog.

And I forgot to mention that two of mother’s friends thought Pip was so lovely that they found border terriers to live with them too. They were called Minnie and Rosie. I didn’t ever meet Minnie, but I did meet Rosie when she was an elderly dog and I was a young puppy.

At first when Pip died Mother and Jane said they couldn’t have another border terrier, because there couldn’t be another one as lovely as Pip. But after a while they realised that no other kind of dog would do. And then they found me.

Jane says Pip and I are equally lovely and very different. I love going in the water but Pip would only wade a little if she really had to. I love to chase balls, but Pip only liked them if Jane wrapped then up in an old sock for her to get out. Pip loved her squeaky toys, but I think they’re scary …

But this isn’t about me, it’s about Pip.

We never met, but Jane and Mother both loved her very much.