Oh my poor blog, I’ve been neglecting you for a while now. Starting the week with good intentions, but then drifting away. Life has been too busy, there have been too many stresses. We nearly had a parting of the ways, I came close to pushing the delete button, but I couldn’t do it.

There are too many wonderful books to celebrate, too many lovely people to visit, and I couldn’t let all of that go.

Things will settle down again soon. We’ll get back into good habits. I’ll get back to writing, commenting, answering comments. All things that I’ve been terribly remiss about.

Let’s start again, as we have many times before, with an A to Z.

A is for AMONG OTHERS by Jo Walton. I am loving this book. I borrowed it from the library, but I am going to order a copy to keep.

B is for BROADCHURCH. Essential Monday night viewing – even my fiancé, who doesn’t usually like television mysteries is hooked.

C is for COURT OF PROTECTION. A bureaucratic nightmare. And that’s all I’m going to say on the subject.

D is for DOGS. I was on the beach with Briar this afternoon and I heard voices. “Is it?” “I think so.” “The coat’s rather shaggy.” I looked up and said “yes it is”, because there was another border terrier – and two humans -looking down at us.

E is for EDITH NESBIT. I’d thought I might reread The Railway Children for my Century of Books, even though I know it backward, forwards and inside out. But then I spotted another book, one that I didn’t know all, called ‘Wet Magic.’ A story of children on a seaside holiday who meet a mermaid and I just have to read it 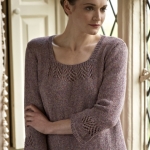 Leonora – not mine, the pattern picture.

F is for FINISHING LEONORA. I have made progress since I entered Leonora in my last A to Z. In fact I’ve finished!

G is for GREEN GINGER. I’ve pulled Winifred Holtby’s The Land of Green Ginger out of the Virago bookcase to fill the 1928 slot in my Century of Books.

H is for HATCHLING by Emily Portman. A lovely part of the current soundtrack to my life.

I is for INNOCENCE.  I’m re-reading The Age of Innocence. I loved it first time around, but now I am noticing things I didn’t before and appreciating the author and the writing all the more.

J is for JANE EYRE. I saw the most recent film version last week, and I thought that it was as well done as it could be given the time constraint. And now I think it’s time to read the book again.

K is for THE KNITTER. I picked up  Issue 57  on Saturday and though there is nothing I want to knit right now I have found some interesting ideas in the patterns and there are one or two articles I want to study. A subscription is  definite possibility ….

L is for LINEN STITCH. A linen stitch scarf is my current nursing home knitting. Very simple – so I can talk and knit – but very effective.

M is for MISS MARPLE. I’m re-reading in chronological author and ‘A Murder is Announced’ – one of my favourites – is up next.

N is for NESTING. Last year we had blackbirds in the hedge, this year we seem to have pigeons.

O is for ORKNEY by Amy Sackville. A lovely piece of writing, and another book I borrowed from the library and now want to keep. 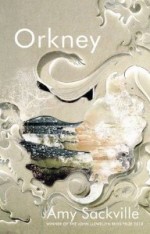 P is for PERSEPHONE BIANNUALLY. It arrived on Saturday, it looks as wonderful as ever, but I’m waiting for some quiet time to sit down and read it properly.

Q is for QUEUE. I have a stack of books I’ve read but not written about, but I’m going to have them form an orderly queue and then write about them in turn. At least, that’s the plan …

R is for RESERVATIONS. Last month they cost 50p and this month they cost 80p. There was no warning, I just spotted it when I checked my library account and the amount owing was higher than I expected.

S if for SMOKE FAIRIES. Another element of the soundtrack to my life.

T is for THINGS. I’ve been sorting through my mother’s things. Some that I know she’d like to have with her in the nursing home, some with history attached to be put away, and some to let go.

U is for URSULA TODD. I picked up my copy of ‘Life After Life’ from the library on Saturday, and I plan to read Ursula’s story next weekend.

V is for VANITY FAIR. I’ve drifted away, but I will be going back

W is for WILD WEATHER. I woke up early this morning when the house shook. And by high tide, a couple of hours later, sea spray was hitting the windows.

X is for EXHIBITION. I’m planning on going to see Summer in February Art in Lamorna: 1910 to 1914 at Penlee Gallery next weekend.

Y is for THE YOUNG ARDIZZONE, still sitting in my library pile. I want to read it, but I know that when I finish I’ll have no excuse for not taking it back to the library.

Z is for ZOLADDICTION. I wish I’d noticed this sooner, because I’ve been meaning to read more of Zola’s work for ages,