March 26, 2013 By Fleur in her World in Book Reports Tags: Will Storr Leave a comment

I dithered over this book for a long, long time. It looked very dark, very masculine, and yet the prospect of a story of food and witchcraft set in the nineteen eighties was enticing. So I said yes. 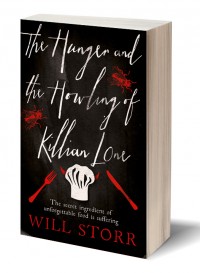 Killian Lone grew up in a troubled home, he was bullied at school, but he had a wonderful talent. He could cook. And he was fortunate to have an aunt who nurtured that talent, who encouraged him to pursue his dreams, and who left him her home so that he could get away from his.

It was then that Killian learned that he came from a line of gifted cooks stretching back to the 16th century. And that the first cook in that line had been burnt as a witch …

Killian’s idol was Max Martin. He was the superstar chef, the public face of the oh so fashionable London Restaurant, King. And he was loved, known to the word as the gentleman chef.

But when Killian secured in a coveted apprenticeship at King he found that things were rather different behind the scenes. That his hero was a despot who would sacrifice anything, anybody in his quest for perfection.

Some would crumble under the pressure. Many did. But Killian had uncovered the family secret and it gave him the means to fight back.

But the family secret had been buried for very good reasons, and there were strange and unexpected consequences to Killian’s actions.

At first Killian’s story felt like a game of snakes and ladders. He would move steadily forward, but every time something went his way there would be something. or more often someone, to push him back down.

It was very readable, it was clearly very well researched, and it had much to say about ambition, power and the darker side of human nature. There was much that was uncomfortable to read, but the kitchen scenes had a horrible ring of truth.

The first half of the book worked well, and I willed Killian on. The second half less so. Killian changed. I know people do. I know that power corrupts. I know about cycles of abuse. But this seemed a little sudden, and I felt a little lost with no one to follow.

I would have liked a little more witchcraft – that side of the story was a little underplayed, almost just a device to make the plot work – but I was very taken with the portrayal of life in a high-end kitchen.

I was impressed too that The Hunger and the Howling of Killian Lone worked on two levels. You could read it simply as a great page-turner or you could read it as a bigger story about ambition, power and greed. A modern fable if you like.

But you shouldn’t so what I did. This is not a book to read in your lunch breaks; it’s very graphic in places. Not gratuitous, but there are thing that might happen in kitchens that I would really rather not think about.

Once I picked up  The Hunger and the Howling of Killian Lone I was always going to read to the end. It wasn’t quite the right book for me, but I’m inclined to think that it would be a great book for the right reader.