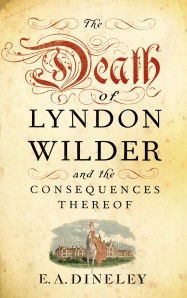 Oh what a wonderful book!

And it begins with one governess. Anna Arbuthnot was a little to tall, a little too thin, a little too red-headed, and a little too poor to be successful in the marriage stakes. But as the eldest daughter of a widowed clergyman who had helped to bring up her younger bothers and sisters she was a wonderful prospect as a governess.

Her charge was Lottie, a nine year-old orphan who had seen off more than one governess in the past. her mother was long dead and her father,  Lyndon Wilder had died more recently, in the Napoleonic Wars.

I loved Anna from the first, and she was well able to win over Lottie. Their relationship was beautifully drawn. In time Lottie revealed herself as a bright, imaginative child who much prefered actively exploring the world to sitting ar her desk and learning.

But Anna had to walk a fine line, because she was in a house in deepest mourning.

Lottie’s grandmother, Lady Charles, was totally wrapped up in her grief for her eldest son. Nothing mattered, save Lyndon and his memory. Lord Charles was a little more clear-sighted, but he would do nothing that would upset his wife.

I understood that grief, it was tangible, but I also saw how selfish it was.

Anna and Lottie made friends with the neighbours. Mrs Kingston was a widow, and the only visitor Lady Charles would receive, as she had once hoped to marry Lyndon Wilder. And her son, eleven year-old Horatio, who was destined to join the navy, just like his father. Horatio and Lottie would become great friends, and Horatio had a very important tole to play as the story unfolded.

Lord and Lady Charles had another son.  Thomas, was a major in the army, a career soldier who had never expected any other life. He didn’t want to leave his men, but he knew that he had to go home. When he got there he found a mismanaged estate, depleted finances, and an unwelcoming household.

Thomas knew that he had to do something, that his brother was not the golden boy his parents believed him to be, but he knew that would never be acknowledged.

I saw that he was the man his circumstances had made him. A less favoured child who had had to make his own way in life, and who had  developed a hard shell along the way. But I could also see he was a fundamentally good and decent man, and not entirely unlike his father. But his patience was finite …

Lyndon’s past actions and Thomas’s present actions would have consequences.

There would be intrigue, drama, and just a touch of romance as the story played out. The writing was simple, but the wonderfully vivid drawing of the characters and the relationships made the story sing.

I spotted a few fortunate coincidences – mainly people being appearing at exactly the right place at the right  – but not too many.  What I would have liked rather more of  was Anna’s correspondence with her father. Her letters  were wonderful!

You can read The Death of Lyndon Wilder and the Consequences Thereof simply as a wonderful entertainment, but there is more there too, if you care to look for it. The story is rich in historical detail. And so much that  is considered in that story – bereavement,  family politics, how children should be raised, social inequalities – that is both important and timeless.

All of that is done so well, and it gives the story such richness.

It was wonderful company on a long train journey, and I’m inclined to say this is a book that could be appreciated both by those who already know and love the period, and by those who don’t and are looking for a way in.