Now this is lovely. A beautifully told love story, that grows into the story of a family, and then into something bigger and deeper. A compelling tale of life before, during and after the Spanish civil war.

And it was a bestseller in the 1960s, it was translated into more than twenty, it became a beloved classic, and now that I have read every word I can easily understand why. 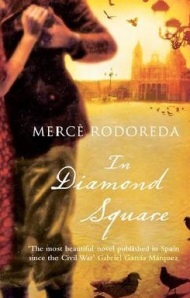 Natalia was a shop-girl, with a fiancé, living in the working class quarter of Barcelona in the early 1930s. Her life changed at a fiesta in Diamond Square. She met Joe, she danced with him, and he told her that she would be his wife within the year.

He was right. They did marry, and they had two children: a son and daughter.

I warmed to Natalia from the start. Her voice was so warm and so honest, and I could hear her voice. It was clearly so important to her to tell her story, to make everything clear, and it felt as if she were speaking to a friend.

Natalia realised that life would have ups and downs, good times and bad times, and that she had to accept that and focus on what was important. Her home and her family. And she did make the best of things, though she was rather inclined to dwell on things, suffering in silence.

I wished she had spoken up for herself a little more because there were times when her husband needed telling!

Joe bred pigeons. It started with just one, an injured bird he found in the street, and that one bird led to many, many more. Joe and the children loved the birds, but Natalia hated them. The noise, the smell, the feed, the dirt, every time she had to go into the loft space.

When the war erupted, Joe left to fight the Fascists and Natalia was left behind, struggling to make ends meet when her employers said they didn’t want the wife of a troublemaker in their house, not knowing how she was going to manage to feed her children.

But when the pigeons flew away, because nobody came to feed them, Natalia hardly noticed. The war years were such a struggle for her, and for everyone around her.  And after the war her life would be very different.

Natalia said little about her feelings, preferring to speak of what she was doing and what was happening in her world. And yet I understood her feelings. The way she wrote about her husband, her children, her parents, her in-laws, made them so very clear.

Her words had such intensity, and she described everything wonderfully well: the home she made for her family;  the streets of her home quarter; her employer’s grand home; the shelves full of different goods in the grocers shop; Natalia noticed every detail.

In Diamond Square is simply one woman’s life. She doesn’t consider the politics, the bigger picture, she simply relates what happened to her, what she did, how she lived.

And that is enough, because she lived through such a significant period in her country’s history, and because her works are so lovely and they illuminate her life quite beautifully.

I love seeing history and visiting lives this way, and I’m delighted that In Diamond Square has joined the Virago Modern Classics List.