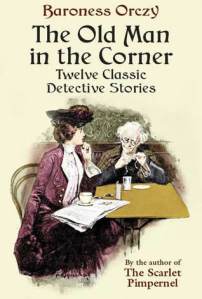 I must confess that, until quite recently, the only thing I knew about Baroness Orczy that she gave the world The Scarlet Pimpernel.

Emmushka Orczy was the daughter of Hungarian aristocrats. They took their family abroad, to Brussels, to Paris, and finally to London, to give them the education and the experience to stand them in good stead when they took their places in Hungarian high society.

It was in London that Emmushka was enrolled at art school; and it was at art school that she fell in love with the man who would become her husband. And some time later, when the couple were living in somewhat straightened circumstances, Emmushka noticed that their landlady’s daughter often received cheques in the post, in exchange for stories she sent in the post to magazines and newspapers. And she decided that she could do the same.

She decided to create a detective nothing like Sherlock Holmes. His first case was published in 1901 and it would be the first of many. And his cases would be collected and published in book form. The book I read was not the first to be published, indeed it wasn’t published until 1909, but it collects the earliest stories and so I thought it would probably be the best place to start.

The Old Man in the Corner spent his days in a London coffee-house, studying newspapers and court reports, and solving crimes that had baffled the police using simple logic and reasoning. And he talked over each case with a Lady Journalist.

Those crimes – fraud, theft, blackmail and, of course, murder – are diverse, but there is a common thread running through them all. They are crimes committed for gain – to preserve a reputation, to gain an inheritance, to rise in  the world … There were no crimes of passion, no habitual criminals in these pages.

But, given the constraints of the format, the twelve tales were wonderful diverse.

A Russian millionaire drowned in the Thames! A forged will! A woman found dead on a train! An audacious street robbery!

The locations moved from the streets of London, to Liverpool, Manchester, Glasgow, and  even over the Irish Sea to Dublin. The characters came from all walks of life:  a landlady who worked hard to get by; a young jewellers clerk, newly arrived from Germany; a poor young man taken up by a wealthy widow; one of the first generation of lady doctors.

I was pulled back to the period, I could see the places,  I could believe in the characters. And, crucially, I wanted to know what happened!

It helped that the writing was simple and clear. And I always felt  that Emmushka was of places she knew, people she might have met.

The conversations between the Lady Journalist and the Old Man, who had buttonholed her first, and who had intrigued her sufficiently to keep her coming to visit her worked well.  It was hard to argue with his logic, but sometimes the events he described seemed a little too unlikely.

I’m not going to be rushing back for more, but I wouldn’t rule out picking up another volume one day either.