February 11, 2013 By Fleur in her World in Book Reports Tags: Sophie Divry 11 Comments

Saturday was National Library Day. I went into the library, returned books, had a quick scan of the shelves, picked up by reservations, checked them out, and then left without seeing any sign of a librarian. The result of technology, budget cuts, and council departments being merged. And so it was particularly lovely to bring home a library book with a real life librarian inside. 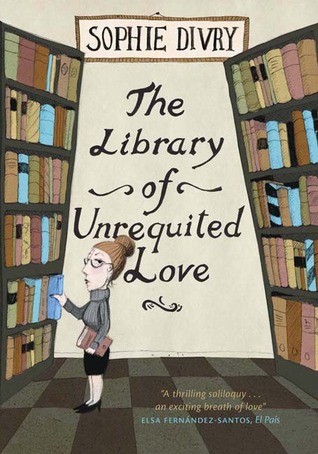 The lady in question arrived for work in the basement to find a reader who had been locked in overnight. She was not impressed and so she gave him a piece of her mind. And then she gave him a cup of coffee too, because he would have to wait a while, until the library opened, to get out.

She lectures him about the library: the Dewey decimal system and its evolution, the lowly status of her beloved geography section, the politics of libraries, book acquisition policies, the irritating habits of library users … Yes, she moans, but she imparts so much knowledge, she clearly cares about the library, she clearly still believes in the traditional art of the librarian.

And she loves books:

“When I’m reading, I’m never alone, I have a conversation with the book. It can be very intimate. Perhaps you know this feeling yourself? The sense that you’re having an intellectual exchange with the author, following his or her train of thought and you can accompany each other for weeks on end.”

He words are conversational, but she doesn’t let her unexpected guest get a word in edgeways. Even so, his interjections and her responses to them make it clear that he is listening and that he is interested. She clearly recognises that and she relaxes, becomes more passionate more articulate.

It helped that she revealed much of herself along the way.  She was a quiet, rather old fashioned woman, who tried to do the right thing and wished that others did too. But they didn’t. The world had changed but she hadn’t.

I felt for her, I really did.

And I thought if only the traditionalists and the modernisers could meet halfway, how wonderful the library service could be.

She had an unrequited love for a researcher named Martin, and she had an even deeper passion for books and the arts. That was what sustained her, what kept her going.

I’ll be taking her back to the library next Saturday. I’m very pleased we met, but the parting won’t be painful.

I do hope though that she will meet many more readers, she meets a few librarians, and most of all that she meets some of the bureaucrats who make decisions about how libraries are funded and run.

I’d like them all hear what she has to say.