February 4, 2013 By Fleur in her World in Book Reports Tags: Margaret Kennedy 3 Comments

In The Constant Nymph, Margaret Kennedy spun a story about love, music, and the relationship between the two, around the family of the brilliant bohemian composer, Albert Sanger. In this, the sequel, she tells another story of that family, considering the same themes. A more conventional love story.

Caryl was the eldest son of the great composer. He had looked after all of the practical issues that his father hadn’t wanted to be bothered about. Because he loved music, he knew what music could do, but he also knew that while he had inherited some of his father’s talent he had not inherited his genius, or anything else that would set him apart.

After his father’s death, when his family scattered Caryl found himself in Venice. And he found himself engaged to play popular songs on his violin, to entertain visitors. He knew he was lucky to live in such a place, to live a musician’s life, but he yearned for more. And one day he seized it, and played the music he felt in his veins, the right music for a place of such timeless beauty.

That lost Caryl his job. But he had caught the ear, and the eye of Fenella McClean, the nineteen year-old daughter of a wealthy London family on her first visit to Venice. She loved music, in her heart and in her soul. She fell in love with Caryl. And he with her.

It was wonderful to be young and in love and in Venice. But then disaster struck. A young woman appeared in the McClean household, carrying a baby and asking for Mr Sanger. Naturally Fenella’s parents were horrified, and they decided that the young lovers must be separated. They left immediately, with Fenella protesting vehemently; their destination a grand hotel in the Alps.

Caryl realised that his brother, Sebastian was in town. Sebastian who had inherited his father’s charm, his father’s singlemindedness, and his father’s genius. And he would discover that the young woman was Gemma, Sebastian’s muse, who cared little for music but accepted it because she loved Sebastian.

Now for all his failings Sebastian had a good heart, and he suggested that they travel to a certain hotel in the Alps and offer their services as musicians, so that Caryl and Fenella could be reunited. It was a hare-brained scheme, but Caryl had no job, no money and no better idea, so the party set out.

It was an eventful journey, and an unfortunate incident with a fellow traveller left Caryl, through no fault of his own, unable to show his face at the hotel. Sebastian offered his services as emissary, to bring the lovers together. Fenella, who had nearly forgotten her Venetian interlude, was charmed, by the romance of it all. And by Sebastian.

And then the story moves to London. Where Caryl finds a job with a music publisher, as the first step towards his dream of offering Fenella a fitting home. Where Gemma, who had an unhappy past, tired to make a home for her lover and her child. Where Sebastian continued to write, knowing that a brother in music publishing would be very useful when his finished his ballet. And where Fenella pondered the nature of love and what she really wanted from life, torn between Caryl and Sebastian and their different qualities.

All of this, of course, had consequences, as the story grew from a romantic comedy into something deeper and richer.

The way that Margaret Kennedy used her characters and their relationships with each other to create a story was wonderful, and she told that story beautifully. Her writing is subtle, understated, and yet every scene, every setting is alive, filled with exactly the right details.

Her characterisation is not quite so strong – or perhaps it would be fairer to say that she does not trouble overly to make her characters sympathetic.

I loved Caryl and his attitude to life, though I wished I’d seen a little more of the spirit that made him ditch the popular songs, and made his take drastic action rather later in the story.

At first I loved Fenella too, but as the story progressed, as she tried to decide whether her feelings for Caryl or her feelings for Sebastian were true love, she became more and more annoying. This was the weakest strand of the story, and the only strand I couldn’t quite believe.

But as Fenella fell Gemma rose. She started off as a simple bohemian girl, but as life tested her she grew up. There was a very obvious way this story could have played out, and it is to Margaret Kennedy’s great credit that she didn’t take it.

And finally, of course, there’s Sebastian. The simplest way to describe him is as a little boy who never grew up, but he’s rather more complicated, rather more charming than that. I never gave up hoping that he would do the right thing.

And maybe he did. He was there at the perfect ending of a novel that wasn’t quite perfect, but was always entertaining and thought-provoking. 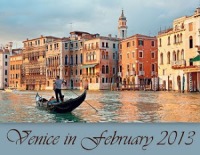 This is my first book for Venice in February. It’s been on my library pile for a while, but when I saw where it was set I decided to save it. I was sorry that the story didn’t stay in Venice for long, but finishing in London feels right, because I have a book lined up that starts there and then moves to Venice …