January 29, 2013 By Fleur in her World in Book Reports Tags: Elizabeth Gaskell 10 Comments 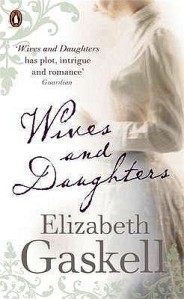 Towards the end of last year I spent many happy hours visiting a world so perfectly realised that it still lifts my heart when I think of it. I stepped into the middle of the 1830s,  into the English countryside that Mrs Gaskell knew so well, I met people who were so real, fallible, interesting, and I became caught up in their lives and their stories.

At the centre of it all was Molly Gibson, the only child of a widowed doctor. The apple of his eye.

In a lovely prologue she was twelve years old and she had been taken The Towers, home of the Duke of Cumnor, for a day of  grand entertainments. Molly had a lovely time, but there was just one oversight: she was left behind, napping on a big bed, when the  carriages drove away. She was found, of course, and looked after, but gown-ups don’t always understand childish concerns, and Molly didn’t know how she would ever escape. until, of course, her father came and rescued her.

I loved Molly from the start, her love for her father, her openness, her honesty. I felt that we were friends, looking at the world together as the story unfolded.

We met again when Molly was seventeen, and her father sent her to visit the family of the local squire. he had been concerned when one of his pupils had taken a shine to his daughter, and that concern gave his daughter a new family. He would always be first in her hear but she became a daughter to a mother of sons, a sister to those sons, and a particular favourite of their father.

And so the stage was set for a story that would move between the aristocracy, the old gentry and the new professional classes. And a story that would say much about a changing world, as one of the young men Molly came to love as a brother was drawn to the arts and romanticism, the other was drawn to science and exploration, and their father clung to his home, his land, his heredity.

All of that is there to ponder, and a glorious plot unfolds.

Molly’s world shifts when her father, quite unexpectedly brings home a new wife, because he is sure that his beloved daughter needs a mamma to guide her. Hyancinth, who was beautiful but terribly, terribly grand, terribly aware of appearances and social position, had been governess to the family of Duke of Cumnor, and she brought with her a daughter.

Cynthia was bold, confident, and yet she was terribly vulnerable, and though they were very different, had very different ideas about their futures, they became firm friends.

The story holds so much. Fortunes rise and fall. There are births, marriages and deaths. There is domesticity, there is society, and there is travel. And there are secrets, and they will have such consequences…

All life is there, from quiet domesticity to grand events, and through everything in between. And lives are lived. A broad cast of characters – no not characters, people, because everyone is so perfectly drawn – live, love, make mistakes, learn, enjoy good or bad fortune, feel every emotion under the sun ….and so completely realised, real lives are reflected in the pages of these book.

There are so many wonderful scenes, so many moments that strike a chord.

The depth of understanding is obvious and the writing is beautiful. Mrs Gaskell has a wonderfully light touch, an instinctive understanding of when linger and when to pass on, and always finds exactly the right words.

She didn’t live quite long enough to finish this book, but she pulled me so fully into its world that I knew what had to be. I’m gushing, I know, but I am smitten. And I know that I will always remember this world, and that it will keep calling me back.