January 24, 2013 By Fleur in her World in Book Reports, Classics Club, Filling In The Gaps Tags: W Somerst Maugham 13 Comments

I must confess that, though I loved the recent film adaptation of The Painted Veil, I have been circling my copy of the book for a long, long time. Because for years Maugham lived in my box marked ‘A Great Author But Not For Me.’ Wrong, wrong, wrong!

In the end I picked it up because it was small enough to fit in my handbag to read at lunchtime and short enough that it wouldn’t take forever to read. And I fell in love. With lovely, elegant prose; with the clear understanding of the human condition; and with the characters and their stories.

Kitty was one of two sisters, daughters of a good family, living in London in the 1920s. She had been expected to make a good marriage, and yet after several seasons she was no nearer to her wedding, and her chances were lessening. She knew that, and when her younger sister became engaged to a most eligible man she found that she could not bear the idea of being the bridesmaid. 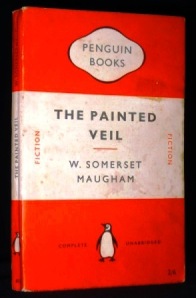 Walter Fane, a young doctor home on leave from Hong Kong, saw that situation, and he proposed to Kitty. He was a quiet, serious, bookish man; not Kitty’s type at all; but she saw a chance of escape and she took it.

I understood completely why he had proposed, why she had accepted, but I feared for their future.

Hong Kong had a busy social scene but Kitty, as the wife of low-ranking government employee, had no place there. Her husband was attentive, but she didn’t love him, it wasnt;t enough. And so Kitty drifted into and affair with a handsome, charming government official. She was besotted, and willing to give up everything to run away with him, but he was ambitious and comfortable with his wealthy, forgiving wife.

I could see that, but of course Kitty couldn’t.

Inevitably Walter discovers the affair. He speaks honestly, about her, about him, and about their marriage.

“I had no illusions about you,” he said. “I knew you were silly and frivolous and empty-headed. But I loved you. I knew that your aims and ideals were vulgar and commonplace. But I loved you. It’s comic when I think how hard I tried to be amused by the things that amused you and how anxious I was to hide from you that I wasn’t ignorant and vulgar and scandal-mongering and stupid. I knew how frightened you were of intelligence and I did everything I could to make you think me as big a fool as the rest of the men you knew. I knew that you’d only married me for convenience. I loved you so much, I didn’t care. Most people, as far as I can see, when they’re in love with someone and the love isn’t returned feel that they have a grievance. they grow angry and bitter. I wasn’t like that. I never expected you to love me, I didn’t see any reason that you should, I never thought myself very lovable. I was thankful to be allowed to love you and I was enraptured when now and then I thought you were pleased with me or when I noticed in your eyes a gleam of good-humoured affection. I tried not to bore you with my love; I knew I couldn’t afford to do that and I was always on the lookout for the first sign that you were impatient with my affection. What most husbands expect as a right I was prepared to take as a favour.”

And he offers his wife an ultimatum: she can have her lover take immediate steps to divorce his wife and marry her, or she can travel with him to the Chinese interior where he has offered his services to treat the victims of a cholera epidemic.

Kitty tells Walter that she never loved him, that her lover will marry her, but she discovers that he won’t.  And so she has no choice but to travel with her husband to a ravaged, isolated community.

It is there that Kitty comes of age, finds a purpose in life, and realises the true worth of her husband. But Walter cannot forget what his wife has done, or what he had done: marrying her when he knew that he could not give her the life she wanted, be the husband she wanted, and punishing her with that terrible ultimatum.

The Painted Veil is a clearsighted, understanding study of a difficult marriage. Neither Kitty nor Walter is entirely sympathetic, but I found it easy to understand that their natures, their emotions, and their circumstances had made them what they were. I cared, I wanted the best for them, though I had no idea what that might be.

Maugham offered no easy answers. But he did offer a wonderful story told in simple, clear, elegant prose. He did paint vivid pictures of the world Kitty and Walter lived in, a world that he knew well. And, best of all, he offered moments of such clarity, such understanding that I had to catch my breath.

I have moved Maugham to a different box, marked ‘A Great Author And I Must Read More of His Books,’ now.

Which books are the must-reads … ?

Are there any best avoided … ?