January 4, 2013 By Fleur in her World in Book Reports Tags: Kate Hubbard 14 Comments

What a wonderful idea: the story of the sixty something years when Queen Victoria reigned, told through the experiences of the men and women who served her. The experiences of high-ranking courtiers, who were close enough to see how the queen and her family lived, who were not overawed by the world they found themselves in, and who, of course, left letters and diaries to speak for them.

And from those documents Kate Hubbard has built a wonderful story, vividly written, chock full of details, and utterly readable.

Lady Sarah Lytton was a widow with a family to support when she came, reluctantly, to court to become a lady of the bedchamber to a young, unwed Victoria, and later she would rise to become the superintendent of the royal nurseries. Charlotte Canning, a younger woman, with a fine mind and an artistic sensibility became a lady of the bedchamber some years later. Mary Bulteel was a maid of honour before she became the wife of the queen’s private secretary.

Henry Ponsonby was that private secretary, a job for life, and his path crossed with those of James Reid, physician in ordinary, and Randall Davidson, domestic chaplain. 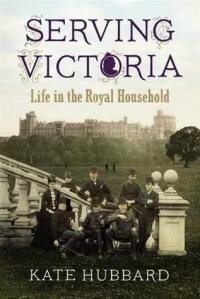 Six very different characters, with different roles, and so the focus moves. From the life of the queen with her ladies; to her marriage and the raising of her children; to her homes – Windsor for duty, Balmoral for love, and Osborne for recreation – and her travels; to political crises and her varied relationships with her prime ministers; to the extended periods of mourning and seclusion that followed the death of Prince Albert; to her relationships with John Brown and Abdul Karim; to her slow decline, her death and finally to the laying out of her body.

It was all familiar, but the perspective made this such a very human story, with the lives of the queen’s courtiers set against their clear-sighted views of her life.

The daily life of the court depended upon the Victoria’s will, tempered a little by Albert while he lived, but becoming more rigid, more unthinking, and sometimes downright irrational in her later years. It might be sensible for maids of honour, single young women, to be restricted and chaperoned, but it seemed heartless that Lady Lyttleton was begrudgingly given so very little time to see her children and grandchildren, that James Reid was compelled to keep his engagement, late in life, to an eminently suitable lady-in-waiting secret …

There was always rules, conventions, proprieties that must be kept, and when the queen became a widow, as she grew older and frailer, she became more demanding and completely oblivious to the feelings of those around her. Henry Ponsonby struggled, as her sight failed, to make his writing bigger and clearer, to find heavier paper so that the ink would not show through …

But, in spite all of this, Victoria was an engaging human figure. She loved her husband, her home at Balmoral, her fresh air. She struggled with life as a widow. She was vulnerable, and sometimes she made bad choices, but she could never admit that she was fallible. I realised that she was a woman who knew no other life, saw very little of the world, and who maybe would have been happier if she had.

I felt as much, sometimes more, for the people around her. But I don’t want to say too much. Better to notice all of the details as you read. From details of meals to the Queen’s feelings about the prime minister of the day! From drunken servants to appointing bishops! And this is a book that I think will work for anyone who is interested, whether they’ve read everything or nothing about the period.

This is a book full of engaging characters, fascinating details of their lives, and fresh perspectives on familiar pieces of history.

The only thing it lacks are family trees and chronologies. With the shifting perspectives prime ministers, and princes, come and go, live, marry and die, and changes aren’t always noted.

But that’s a minor point, I was completely wrapped up in the lives of the Queen and her Court, and the story never lost its grip.

This really is a fascinating book – I could happily go back to the beginning and read it all over again – and one that I can recommend.