December 3, 2012 By Fleur in her World in Book Reports Tags: Susan Hill 7 Comments

I have enjoyed Susan Hill’s Simon Serailler crime novels for many reasons.

The quality and the intelligence of the writing. The well drawn characters and relationships. The broad perspective, taking in all of those touched by crime and considering issues that most crime fiction does not. And the willingness to break with the conventions of the genre, leaving loose ends, carrying plot strands between books.

But as the series moved on a few things bothered me.

The structure of the stories became more conventional: crime, detection, solution. The story of the Serailler family drifted dangerously close to soap opera, with rather too many dramatic events in the lives of a small group of people in a short period of time. And sometimes the treatment of the issues felt a little heavy-handed.

The quality was still there and I still liked the latter books, just not as much as the earlier ones.

And then came book six – The Betrayal of Trust – and those failings became too much. Character and play were sacrificed to present issues. Important issues that the author clearly felt strongly about, but that caused her to lose balance.

It was a horrible disappointment, and I wondered if Susan Hill was losing interest in the series, but I wasn’t ready to give up and I picked up the next book, hoping for a return to form. 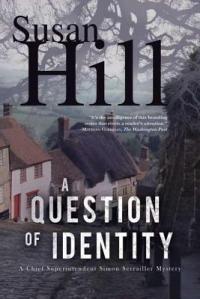 A Question of Identity begins with a brilliantly drawn courtroom scene. The year was 2002 and Alan Frederick Keyes was on trial for the murder of three elderly women. Public feeling was running high, the case seemed open and shut, but doubt was cast on the eye-witness evidence of one witness and Keyes was found not guilty.

He wanted to walk out through the front doors of the court, but he was held back. For his own safety, because he was so notorious and feelings were running so high …

Ten years later, residents were moving into Lafferton’s new housing development. It had been specially designed and  purpose-built for the elderly. A woman was killed. And then another.

Simon Serailler heads the investigation, as residents are distressed, families are troubled, and questions are asked. There is little physical evidence, no eye-witness evidence, and so a painstaking examination of every detail begins.

The deaths have striking  similarities with murders that happened ten years ago, and so the hunt for Alan Frederick Keyes begins. But he has disappeared.  His identity was changed, his ties with his old life severed, for his own protection. And the details will not be disclosed. It’s a fascinating development, and it throws up significant questions about the rights of the individual versus the rights of society.

This is, of course, set against the lives of the Serailler family. Simon’s sister, Cat, is still finding life as a widow hard, coping with the consequences of NHS cuts and fallings out among her growing children. She’s also concerned about, Judith, her step-mother.  The characterisation is pitch perfect, but the plotting still has a little too much of the soap opera about it.

Simon’s relationship with the enigmatic Rachel, who is still tending to her dying husband, continues and there is a hint of change to come. But I found it hard to care because there has been nothing to show how the relationship has progressed from an initial attraction, and Rachel’s character is horribly underwritten. That’s particularly disappointing when the Serailler women were so well drawn.

There was more than enough to hold me, but not enough for me to say this is a complete return to form.

Along the was the storylines left hanging from the last book were nicely tidied up, but some  interesting possibilities were left hanging.

The thoughts of the killer scattered through the book were less well done. Others have done before, and done it better,  and in the end it gave no answers.

The final denouement was dramatic, but rather improbable.

And so I am still wondering if Susan Hill has rather lost interest in this series. I hope not. I don’t want it to go on for ever, but I’d like another book or two, and to finish at a point that is in some way an ending.

So, for now, I’d like to propose a  change. A move for Simon, or something else that would allow the ongoing storylines to be pushed back and the stories of the crimes. the lives affected by crime, and the issues involved to be pulled  forward.

Or maybe to go somewhere else with Cat, whose character and situation is far too interesting to let go … dare I say more interesting than her brother … a different kind of story …

But who knows what the future holds. For now I just have to report that this is better than the book before, back to good but not back to great.