September 11, 2012 By Fleur in her World in Book Reports Tags: Hélène Grémillon 3 Comments

I wasn’t at all sure about The Confidant when I first picked it up. I was happy with the prospect of a story set in wartime France, but I was a little worried that the story was told through a series of anonymous letters in the 1970s. Wasn’t that just a little bit contrived?

Maybe, but the opening won me over.

I got a letter one day, a long letter that wasn’t signed. This was quite an event because I’ve never received much mail in my life. My letter box had never done more than inform me that the sea was warm or that the snow was good, so I didn’t open it very often. Once a week, maybe twice in a gloomy week, when I hoped that s letter would suddenly change my life completely and utterly, like a telephone call can, or a trip on the métro, or closing my eyes and counting to ten before opening them again.

And then my mother died. And that was plenty, as far as changing my life went: you’re mother’s death, you can’t get much better than that …

Suddenly that premise made sense. A story that could only be told once certain of the protagonists were dead. I found myself liking Camille. She was bereaved, she was pregnant, and she was none to sure what she was going to do.

The letters told the story of a boy and a girl who had grown up in the same village. Louis and Annie. First they were friends and then they were sweethearts. They might have lived happily ever after.

But then Monsieur and Madame M settled in the village. Annie was a talented artist and Madame M noticed her, encouraged her, took her under her wing. They grew close. And when Annie discovered the source of Madame M’s sadness – that she could not carry a child – she offered to carry one for her.

It was an extraordinary offer. And it was accepted. 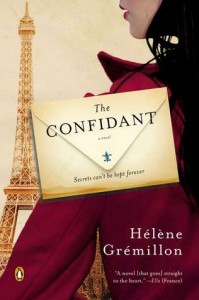 The relationship between Annie and Monsieur M, that was supposed to be dispassionate turned into a passionate love affair. Madame M saw that. She was jealous, she was angry, and she wanted revenge. Monsieur M was caught up in the war and the two women were left with the child. Both of them wanted to be her mother but only one of them could.

The story was melodramatic and not entirely believable. And yet it worked, because the emotions were so strong and because they rang so very true.

And because it was told so very cleverly, with Louis sending letters and pages from Annie’s journal, and with Camille reading and wondering what it all meant.

Was it a badly misjudged joke? She worked in publishing – could it be an extraordinary pitch for a novel? Or was it real? And if it was real what did that mean about her identity, about the mother she had lost?

The first half of the book had me captivated. I was first charmed and then gripped by the story. And I was asking the same questions that Camille was asking herself.

The story twisted and turned and I kept changing my mind. The tension grew. Such clever writing.

She thought she had him pinned down. And then a package arrived. The journal of Madame M.

It told the same story from a different perspective, and with some telling differences. I wondered who – if anyone was reliable – and I really couldn’t decide. But I appreciated that there was no black and white, only shades of grey, and that there would be no easy resolution for Camille.

The writing was uneven and there was always a hint of contrivance, but I believed in the characters and their relationships, and I thought the plotting was very well done.

The ending was very well judged.

And, though the story was flawed, I am still thinking about it …