September 6, 2012 By Fleur in her World in Book Reports Tags: Pat Barker 5 Comments

Looking back, I realise that Pat Barker’s Regeneration trilogy was responsible for a shift in the direction of reading. Those books made me realise that war books weren’t just about men and fighting. And that I could learn a great deal about the world and humanity through books that considered war and its consequences.

Since then I’ve read and learned a great deal. But I haven’t read any of Pat Barker’s work, because nothing has called me in quite the same way as that trilogy. Until now …

Toby’s Room is set in the same period, and when I first read about it I saw that it would be a very different novel, but that there would be similarities in the themes and in the structure. A companion piece, perhaps. 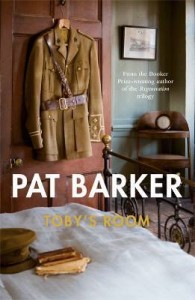 It began in the summer of 1912 when Elinor Brooke, a student at the Slade School of Art, travelled from London, back to her childhood home. It was not a happy home. Elinor’s parents lived largely separate lives; she staying in the country for his health while his life revolved around his club. Her elder sister, Rachel, was distant and critical of the choices she had made. But Elinor was close to her brother, Toby. Maybe too close. Something happened between them that summer that changed their relationship, and shook Elinor.

Back in London she is unsettled; she doesn’t know how to act, and she begins to question what she is doing, what she should do, with her life.

And then the story moves forward, to 1917. Paul Tennant, Elinor’s former lover, is being brought back to England. He is badly wounded, strapped to a stretcher, but he is alive. And Toby is dead.

Grief hits Elinor when the brown paper parcel contains his possessions is delivered.

And then she begins to ask questions. Why did the War Office say that he was missing presumed dead? Why was there an unfinished letter among his possessions. And why did his old friend, Kit, who had been with him not write? She must have answers.

Kit had been gravely injured, his face destroyed, not long after Toby’s death, and he was being treated by pioneering plastic surgeon Harold Gillies at St Mary’s Hospital. Elinor enlists Paul to help her approach him. And she meets her old tutor, Henry Tonks, who is painting the hospitalised men, recording their treatment and it’s progress.

Elinor finds her purpose working with Tonks. And in time, as Paul forms a tentative friendship with Kit, he finds the answers to her questions.

The answers weren’t surprising. I’d realised what they would be very early on.

Pat Barker writes well, without fuss and with clarity, always with the story to the fore. But she held me at a distance. At first I found it difficult to care about these people and their lives. Then though something changed. As the story progressed I was drawn in, by the devastating portrayals of Elinor’s overwhelming grief and Kit’s unspeakable situation.

And I was fascinated by the two characters drawn from life – Harold Gillies and Henry Tonks – and I had to learn more about them.

The inclusion of other real life characters, members of the Bloomsbury group, who crossed paths with Elinor, worked less well. It was a distraction, and it felt like name-dropping.

There were more interesting, more important more relevant themes to consider. The relation of art and war. The roles of women in war. The emotions, the realities, that was draws out. The difficulty in living with the consequences of war.

They were compelling, and though Toby’s Room didn’t strike me as powerfully as Pat Barker’s earlier work, I suspect that is in part she set me on a path and I have read so many books set in and around those war years since then.

It is also because this is a very different story, and because many of its principal characters do not naturally call on feelings of understanding or compassion.

I still consider this a companion piece, but it is also a book that stands up in its own right and has much to offer any reader with an interest in its themes.