September 4, 2012 By Fleur in her World in Book Reports Tags: Jane Casey 1 Comment

After four books – three of them in the Maeve Kerrigan series – I’m seeing a pattern. You do so many things exceedingly well, but so often the final effect is rather spoilt by one or two things rather clumsily.

I will explain, but in doing that there may be a spoiler or two. Nothing too big, and I won’t name any names or reveal too mant plot details. I’ll just say that if you have read and liked the earlier books you’ll like this one too, so do read it and then come back to see if we agree. And if you haven’t and you like contemporary crime read on. If you like the sound of the series, you will miss a lot if you read out-of-order. So go back to the beginning (The Burning) and by the time you catch up with me you’ll have forgotten the things I’m going to let slip.

The opening was dramatic: a 14-year-old girl comes  home to and finds the bodies of her mother and twin sister in the living room, and her father gravely injured in a room upstairs. 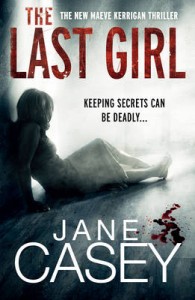 Her father, Philip Kennford, was a criminal barrister at the very top of his profession, and so the pool of suspects was huge.

An interesting case for DC Maeve Kerrigan, a capable and engaging young DC. I’ve grown to like her over three books, her relationships with her colleagues, particularly the forthright, old-school DCI Derwent, are credible, and her relationship with colleague-turned-boyfriend Rob is evolving nicely.

There’s plenty to hold the interest there, and lots of potential for future books.

There was little physical evidence, and so the investigation focused on people from Phillip Kennford’s past who may have borne a grudge, and on the family itself.

The interviews with those people from the past were fascinating: a man wrongly convicted, who felt that his barrister had served him badly; a man whose daughter had been killed by her abusive boyfriend who then had to see a brilliant barrister convince the jury to find him not guilty; a woman whose barrister had failed to maintain a professional distance. The characterisation was perfect, and the stories said much about justice and the legal system.

And the Kennford family was fascinating to watch. A husband who did as he pleased; a wife who accepted that and played the perfect wife and mother to the hilt, knowing that her position was secure because her money underpinned their lifestyle; they were a couple with an understanding. And two different daughters: one dead and one terribly traumatised, and not speaking.

That Phillip Kennford didn’t like the police, and that they didn’t care for him, made things difficult.

There were so many possibilities, and so it was such a pity that it was obvious who the killer would be. There was a sudden shift in direction mid-book. And then one character came to the fore when there was no real reason for them to be there … unless they did it.

The finale was somewhat overwrought.

The logic and the psychology of the murder made sense, but it did rely on one huge coincidence, and I didn’t like the hint of “of course they were mad” and “of course they had a terrible childhood” at the end.

But I did like the book.  Jane Casey writes well, and though the story moved slowly I found there was always a development or an incident that held my attention.

So much good, so much potential in the series, but that makes the weaker elements so much harder to accept.

Oh Jane! I just want you to get everything right, because when you do you could have an outstanding piece of crime fiction on your hands, you really could …