September 3, 2012 By Fleur in her World in Book Reports Tags: Victoria Holt 18 Comments

I wasn’t at all sure that Victoria Holt was my sort of author, but I had to give a gothic romance set in Cornwall the benefit of the doubt. And when I read the opening words I was so glad that I did.

“There are two courses open to a gentlewoman when she finds herself in penurious circumstances,” my Aunt Adelaide had said. “One is to marry, and the other is to find a post in keeping with her gentility.”

As the train carried me through the wooded hills and past green meadows, I was taken this second course; partly, I suppose, because I had never had an opportunity of trying the former.

Martha Leigh – known to her family and friends as Marty – was travelling on the same journey that I have made many times in real life and a few times in print too. She was travelling through Somerset, through Devon, and across Mr Brunel’s bridge into the Duchy of Cornwall.

I liked her. She was sensible, she was bright, she was curious and she was understanding; in just the right proportions. And she was to be a governess, to the young daughter of a wealthy widower. I thought that the position might suit her rather well, and indeed it did. 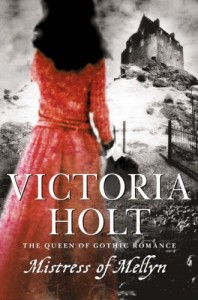 She quickly wins over the household staff, but it takes her a little longer to win the confidence of her young charge Alvaen. And no wonder, when she has lost her beloved mother,  when her father, Connan Tremellyn, was cold and remote, and when a number of governesses had come and gone

Marty could understand Alvaen. She could build a relationship with her. She could lay plans to help her win the approval of her father that she so desperately craved.

But she couldn’t understand Alvaen’s parents.

How could Alice, who it was clear had been happy and loved, leave her daughter and her husband and run away with an old lover? Maybe she hadn’t …

How could Connan neglect his daughter so? How could he take up with the younger wife of an elderly neighbour? Maybe he had a plan …

There are echoes of Daphne DuMaurier and Charlotte Bronte  here: a grand mansion on a Cornish cliff, haunted by its former mistress; a plain young woman set against a dark and brooding hero; hints family of family secrets …

Fortunately Victoria Holt had the ability to take those familiar ingredients and create something a little different. A well executed work of gothic suspense, where as soon as one question is answered another one appears, as soon as one crisis is averted another has to be faced, until one final drama resolves everything.

She brought that that house on the cliff, and the surrounding countryside to life with wonderful descriptive flourishes. I could see Marty and Alvaen in the schoolroom, I could see then watching a grand ball from above, I could see them on horseback out in the grounds …

And I could understand them. The governess who was happy in her role, but who struggled with her position in between the family and the household staff. The unhappy child who blossomed when she was shown real care. And all of the others; every character rang true.

There were some lovely touches, in the dialogue, in the descriptions, in well chosen details, and everything was held together by good old-fashioned storytelling.

I can see similarities between Victoria Holt and Mary Stewart; they were near contemporaries but Victoria Holt’s settings are earlier and she seems rather more gothic; from the start though, I thought that her heroine could have fitted into a Mary Stewart novel quite beautifully.

Sadly there were some weak spots. When the romance came to the fore it didn’t seem as natural as it had when it was mixed was the suspense. The ending seemed a little rushed, and I would have prefered a fuller conclusion in the final chapter to the epilogue that was offered instead.

None of that stopped me from loving Mistress of Mellyn, but it did remind me that the books that inspired it were far finer.

So I’d like to read them again before long, and I’ll give any of Victoria Holt’s other novels that cross my path a fair chance too.