I remember seeing books by Pamela Hansford Johnson on the library shelves in the first days after I traded in my junior membership for a proper grown-up library card. I don’t think I looked at them too closely. They looked rather more grown-up than I was, and so many other books were calling me.

Pamela Hansford Johnson’s books disappeared from the shelves and I forgot her for many years. Until I saw her name amongst a very interesting array of authors on the list of Bello Books. I was curious, and I decided that I must look closely. And then I was intrigued, and though I found it difficult to choose from a wonderfully diverse selection of titles, I  knew that I had to pick one book. I chose Catherine Carter. 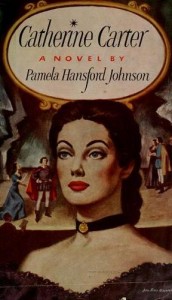 It is a love story, set in London’s theatre world in the latter days of Queen Victoria’s reign. And it is a tour de force, balancing the recreation of a world, a cast of utterly real characters, and a perfectly constructed plot quite beautifully.

Henry Peverel was a successful, young actor-manager rising to the height of his power and fame. He was gifted and he was dedicated, but he was also proud and he did not care to have his authority  questioned. Fundamentally though he was a good man, prepared to go out of his way to look after his friends and his company.

It was one of his company who asks him to give an audition to a young relation. She was an aspiring actress at the very start of her career: Catherine Carter. Henry’s expectations were low, Catherine did not choose her audition piece wisely,  but it was clear that she had a great gift.

And so she was offered a place in his company. Almost at once she loves and venerates Henry; but she believes that she can become his artistic equal.

Catherine had a great respect for Henry, and she could match him for talent ambition. He admired all of that in her, but he was a little less fond of her natural inclination to speak out when she felt something was wrong.

It took time for the two of them to realise that those feelings of respect and admiration had grown into a deep and abiding love. By then they both had other entanglements, he with a leading lady and she with a young actor who had given the appearance of being a quite wonderful catch.

Their romance was far from simple. And it was complicated by their professional lives, which would so rarely run smoothly, side by side.

All of this played out beautifully, and richly over four acts. And that richness and beauty came from so many things.

The cast was wonderful. So many different people, all with their own story, and all utterly real, three-dimensional human beings. I must just pick out a few. Belle the leading lady when Catherine joined the company, was lovely, a gracious, benevolent and regal queen. And a woman with the wisdom to appreciate what she had and to know when it was time to relinquish her throne and move on to other things.

Willy Palliser, Henry’s friend since childhood, was a man who would turn his hand to anything, who would deal with even the trickiest situation with wit and intelligence. And maybe my favourite was Mrs Carter. At first I thought she was the worst kind of stage mother but, though she embarrassed her daughter at times, I came to see that she loved her, she was proud of her, and she supported her even when her daughters actions flew in the face of her own values and principles.

There is a lovely moment, near the end of the story, when Mrs Carter is able to draw on her own experience to help her daughter with an aspect of a role she found troubling. Her happiness at being able to give something to her daughter was so clear, and I shared in it. There were so many moments like that, when I recognised an emotion, a reaction, and incident, and they all helped the story to sing.

And of course there was the writing. It was elegant. It was literate. It showed such understanding, such wisdom, such compassion. And the perspective was perfect: near enough to see every detail, but far enough away to be wholly objective.

I could have stayed happily in this world for a very long time.

But, of course, the story had to end. There was an obvious ending, but Pamela Hansford Johnson had the wisdom to pass that by and to offer something a little more complex that was utterly true to her characters. I applaud her for that.

And now I can’t help thinking that Catherine Carter would dramatise beautifully. I can see four hour long episodes … it would sit well at 9pm on a Sunday …