I know that Jane has told you about some of the changes around here.

Mother is living in a nursing home now, because she needs somebody to keep an eye on her and help with lots of things and we can’t do all of that at home. She took a little while to settle in but now she is quite happy. The staff are very nice and she likes the company and things going on specially for all the people who live there.

She hasn’t been able to take all of her things, but she has a nice selection of pictures and ornaments that Jane has picked out. Things with nice happy family associations. And some photo albums to look through. And Jane has two plastic photo frames and she changes the pictures every week, so that mother has different things to look at when she’s in her room.

That’s given Jane some space to make a few changes at home. She has brought out the brass candlesticks and bowls that her grandmother on the other side of the family left to her. Mother didn’t like them but Jane does. And she has rearranged all of her books.

I still don’t understand what it is with you humans and books. But they seem to make you happy, and that’s a good thing.

Somewhere along the way a gnome appeared on my window sill, next to my armchair. I don’t know much about gnomes and he wasn’t very forthcoming when I questioned him. 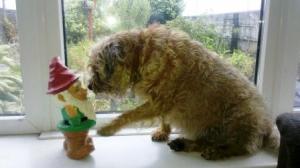 He is gone again now so I shall probably never know.

One thing that hasn’t changed is our curtains. You see, we have magic curtains.

We didn’t choose them, they were in the house before we came. You see, the lady who owned our house before Mother lived here until she was in her mid-nineties, which is quite old for a human, and so her family had some things put in to help her. Including magic curtains.

Jane says that they are a very good thing. You can have them on when you are away to help the house look occupied and because you don’t have to handle the curtains it saves a lot of the bother and cost of dry cleaning.

Now that’s all very well for you humans, but it’s not so good for a dog who likes to get out of her armchair in the window and sit in front of it when it’s getting dark.

I was quite happy, but then there was a whirring noise and I was swamped by curtain. I didn’t like it.

Jane says it wasn’t her, it was the timer. She is going to turn it off and warn me if I am in the path of the curtains. Then I will be happy dog again.

I think that’s all I have to tell you tonight. But I will be back soon, and I expect Jane will be back tomorrow to talk about books.