August 3, 2012 By Fleur in her World in Book Reports, Out of Print Gems Tags: Francis Brett Young 5 Comments

It’s not often that I get to meet a fellow chartered accountant in a book and so when I spotted one, as I cross checked the list of works provided by the Francis Brett Young Society with my library’s catalogue, I had to invite him home. 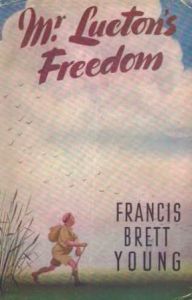 His name was Owen Lucton and when we met, towards the end of the 1930s, he had risen from humble beginnings to become the senior partner of a successful accountancy practice in North Bromwich.

He enjoyed the luxuries and the privileges that his success had brought him, but he loved the simpler things in life , and he was very proud of where he had come from.

But Mr Lucton was troubled, as his son wanted to modernise his business and his wife wanted to move to a new modern home and leave everything from the past behind.

Maybe that was why, when he crashed his new car into the River Avon, when he saw it sink into the mud, he saw a wonderful opportunity. He could escape!

He walked over the Malvern Hills and into the Welsh countryside. And he had some wonderful experiences along the way.

He enjoyed the community spirit in a village pub. He lent a hand on a farm, helping to bring in the harvest. He picked up tips from a dedicated rambler. He was recruited for a village cricket team. He learned how to fish for salmon. He even learned a little about modern poetry.

Yes, Mr Lucton happily turned his hand to many new things. His lack experience and expertise sometimes got him into trouble, but his genuine interest and enthusiasm, and his good manners and gentlemanliness generally saved the day.

But he could never settle, because he knew that sooner or later somebody would realise that he was the missing accountant. He had to keep moving.

Francis Brett Young pulled all of his adventures together into a lovely story. Sometimes it was a little slow, a little uneventful, but there was always something to hold the interest. Beautifully drawn characters. Lovely descriptive passages. Comical and dramatic incidents.

I had no doubt that the author had taken his hero into a world that he knew and loved.

He is a rather old-fashioned hero, and some of his attitudes may raise an eyebrow, but he was a man of his times and his character always rang true.

The day did come when he found a place where he could stay and a community he could join. And that’s just what he did

But it wasn’t the end. One day Mr Lucton found himself faced with a difficult choice. He could help two dear friends in dire straits, but to do so he would have to reveal his true identity and return to his old life.

My heart was in my mouth as I watched him make his decision and take action. And then we parted company.

I saw the decision, but I was left to wonder what all of the consequences might be. And that was exactly right.

Though I was sorry to leave an entertaining piece of escapism, with serious underpinnings.

And I’m sorry that Francis Brett Young’s books seem to be out of print, because they read beautifully and I’m starting to think that they might make wonderful Sunday night television.