…. but the voice in my head disappeared.

The voice that speaks as I read a book pointing out things I must write about, suggesting ways I might develop a post, telling me to pick up one of those useful little markers to make sure I remember particular things I want to remember.

I wasn’t unduly worried because it had happened before, almost exactly two years ago.

Back then I was the a charity finance officer, and the chief executive had, quite unexpectedly, gone long-term sick. I found myself liaising between consultants, trustees, and staff, all worried about what might happen and how we would be affected by threatened council spending cuts. With the benefit of hindsight I took on far too much. But I cared, I saw the gap and there was no-one else, so what else could I do?

The voice was crowded out, but a week’s holiday offered peace and quiet. The voice cam back, and the blog was reborn.

They kept me going – the voice and the blog – when a new CEO was appointed, when he was critical of everything that had been done in the past, when the trustees gave him a free hand, when anyone who dared to express an opinion or ask a question was frozen out.

I resigned to save my sanity, to stop my stress affecting my family, but a year of unemployment was not easy. But thank heavens for books, blogs and so many lovely people out there!

In March I finally found a new job, part-time and close to home so that I could go on looking after my mother.

It seemed that everything had fallen into place quite beautifully.

But then my mother fell ill. She went into a nursing home for a while, because she needed more care than be provided at home. And she got over the illness, but she was left much, much more frail. She still needs 24 hour nursing cover, and she is still in that nursing home.

It is a lovely home, and I think she is as happy there as she could be anywhere, but it is hard to see her weak and befuddled, and very strange to be here in her house without her.

She came to the promenade when she was adopted at the age of four, she loved sitting upstairs in her bay window watching the world go by, and she thought that she would end her days here, but that isn’t to be.

I was coming to terms with things when the practicalities hit me. I’ve been doing battle an array of forms that I need to take to the court of protection so that I can take legal responsibility for my mother’s welfare and affairs.

That’s what crowded the voice out. I’ve read some lovely books over the last couple of weeks and I didn’t have the slightest idea what to write about them.

But I’ve made strides with the forms, I’ve had a productive meeting with a solicitor to clarify a few things, and I’m confident now we’re heading in the right direction.

And today the voice came back. I was sitting outside on a bench, eating my lunch and reading a book, when it pointed out a telling phrase and a significant theme.

So here I am again!

Life has thrown difficulties in my path – and I’m sorry if I’ve gone on about them, but I needed to get it out of my system – but I have been blessed in many ways.

I love my fiance, my dog, the place I live. I have books to read – and re-read, music to fill my head, so many things I want to knit, so many lovely places to walk and spend time. 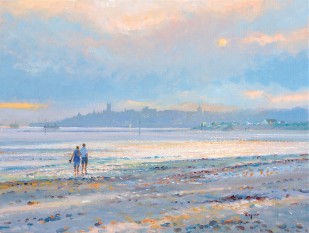 At The Water’s Edge by Ted Dyer

(this is where Briar and I went walking this evening)

But I have to recognise that I have a tendency to take on too much. So I’m stepping back from readalongs. The books will be read, but I’m forgetting schedules. Other projects will carry on, but in my own good time.

I’m going to read the books that call, that offer me what I need as life twists and turns.

I’ll catch up with comments and emails someday soon.

The voice in my head and I are back in business!