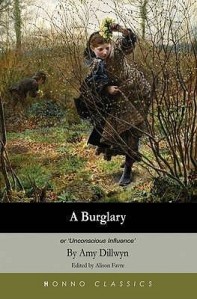 A burglary took place at LLweyn-yr-Allt, a country house not far from the small Welsh town of Cwm-Eithen. The home of Mr Rhys, the local magistrate.

Mr Rhys was hosting a house party, and on the night of the burglary he and all of his guests had were attending a ball in the town.

His two children – children on the verge of adulthood were left alone. Ralph and Imogen were as pleased with that as the adults were with the ball. They raced put into the countryside, to hunt for moths, to go fishing, to picnic …

They had a wonderful time, but when they climbed back into the house in the early hours of the morning, through the kitchen window, they quite forgot to secure it behind them.

That, it seemed was how the burglar got in. He made his way to the bedroom of Ethel Carlton, who was Mr Rhys’s niece and a very wealthy heiress. She woke up, she observed the burglary, but she was quite unable to stop the man who absconded with her jewels.

Suspicion fell upon Ronnie Richards, a local poacher. He was never convicted, but many assumed that he was guilty. And a little poaching is one thing, but burglary is another thing entirely …

Imogen knew, and liked, the Richards family, and she believed that Ronnie Richards was innocent. She was right.

A year after the burglary Mr Rhys took his daughter to London, for her first season. She had many admirers and chief among them was William Sylvester, who had been a guest at Mr Rhys’s house party.

He was smitten with Imogen, but he had to avoid her cousin Ethel. Because she had heard his voice on the night he robbed her of her jewels …

But, of course, he cannot avoid her forever. And when Ethel recognises the voice of her cousin’s beloved she finds that she has a dilemma. She should bring the villain to justice, but how can she face Imogen is she does?

In the end the decision is taken out of her hands. One dramatic event resolves things beautifully.

A wonderful story, made rich by so many things.

The characters are wonderfully well drawn. I loved Imogen, who was bright, who was sociable, who loved the countryside. I admired Ethel, who appreciated how lucky she was, who had strong values, who was good, but not too good. I very nearly liked Sylvester, who had had a difficult life, who was quite genuinely attached to Imogen, though there was no excuse for what he did. And I kept a careful eye on Ethel’s friend, Elise, who cared maybe a little too much for wealth and social standings.

The writing is lovely: clearly Victorian, but with a wonderful lightness of touch that makes it wonderfully readable. A omniescent narrator sometimes stands back and watches events unfold, and sometimes swoops down to explain a character’s background of to emphasise a particular point.

It was beautifully done, it felt completely natural, and it was so very easy to keep turning the pages.

I was thrilled to find an author who could write lovely country scenes, gripping melodrama and social comedy.  And who could make them work so well together.

An author who could thread some very interesting questions about transgressions and how they are judged by society right through her story without ever seeming heavy-handed.

This is a book to enjoy, a book to make you think, and a book to linger in the mind.

(And I must mention that the Honno Books edition is beautiful, and that it comes with an informed and interesting introduction. )