May 29, 2012 By Fleur in her World in Book Reports Tags: Frances Greenslade 4 Comments 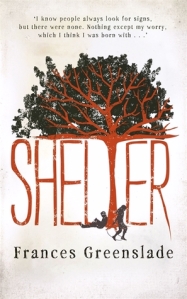 Forty years ago, two sisters were growing up, in a small town, set in the wild countryside of British Columbia. Maggie and Jenny Dillon lived in an unfinished cabin home with their quiet reliable father, Patrick, and their imaginative, free-spirited mother, Irene. A happy family.

Maggie tells their story. And she tells it beautifully. Her voice rang true and she made me see her world, her sister, her father, her mother. I understood how the family relationships worked, I understood what was important to them. And I saw enough to understand one or two things that Maggie didn’t

She was a tomboy, always at her father’s side. He took her out into the country and he taught her how to build shelters, how to make fires, how to live off the land. Everything that she might need to know to survive in the world.

But he didn’t tell her how to survive without him, and when he died in a logging accident his family was stricken.

And then Irene told her daughters that she needed to go away, to take seasonal work to earn the money that they needed to survive. She left them in the care of a childless couple, a couple that Maggie and Jenny had never met. Old friends, good people, she told them.

Maggie and Jenny struggle. Their new home is different from everything that have known before. And when Irene stops writing, when she stops sending money, things become even more difficult.

It was fascinating to watch the characters and their evolving relationships. The girls’ guardians were good people, but they were left in a very difficult position, coping with teenage girls who had started their lives in a very different home with very different values.

The world doesn’t stand still; things changed, and Maggie and Jenny needed their mother to guide them. But she didn’t come back.

In the end, when things became too much, Maggie realised that it was time to use the skills that her father had taught her. She set off to find her mother.

She headed back to her childhood home. She visited old friends and neighbours. And she learned more about her mother, and about what had become of her.

It moved slowly, but that was all to the good. It gave the characters and the relationships, all so perfectly drawn, room to shine. It made me think about so many different ways that the relationships between mothers, daughters, sisters can work. And it made me fall in love with an environment that was so vividly described.

I understood. I cared. And I was pulled into a world and a story that was quite perfectly realised.

Every scene played out exactly as it should.

And the ending was exactly right. The only possible ending. And it made me realise that I was completely emotionally engaged with Maggie and her world.

It was definitely love: for the storyteller and the story she told.