March 23, 2012 By Fleur in her World in Book Reports Tags: Sophie Hannah 11 Comments

Amber Hewerdine was losing sleep, and it really wasn’t surprising. 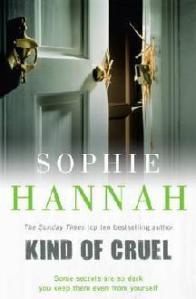 Her best friend died in an arson attack, the arsonist had never been identified, and now Amber and her husband, Luke, were bringing up her friend’s two young daughters.

An incident that happened at a family Christmas spent in a holiday cottage was still troubling her. Luke’s sister, her husband and their two young sons disappeared on Christmas day, not returning until the next morning when the refused to give any explanation of what had happened.

And things got worse. When Amber took positive action to deal with her insomnia, visiting a psychotherapist, she found herself under arrest. ‘Kind, cruel, kind of cruel,’ she said. She didn’t know what it meant, where the words came from, they just came into her head.

The impression of those words had been found on a notepad in the room where Katherine Allen had been found, beaten to death with an iron bar. The police had no idea what they meant.

That’s how Sophie Hannah set up another fiendishly complicated mystery.

She gave it a few clever twists, and then she offered up a solution that was entirely credible but pretty unguessable. I realised about two-thirds of the way through the book who the murderer would probably be. And I was right, but I couldn’t put all of the pieces of the puzzle into place until the very end of the book.

I loved watching those pieces fall into place.

There were one or two niggles but they were more than made up for by many, many wonderful things. I’m not mentioning specifics, because they really aren’t things you’d want to know before you read the book.

I loved observing the characters. They weren’t overly likeable, but they were interesting, believable and complex. Real, three-dimensional human beings.

And there was none of the slight feeling of ennui I’ve experienced once or twice with Sophie Hannah’s leading ladies: Amber was definitely a one-off. She was an intelligent woman; she was a professional; she’d clearly worked to build a strong relationship with the daughters she inherited ; she had with strong – and sometimes unconventional – opinions, and she wasn’t afraid to speak her mind, though she understood that sometimes it was wiser not to… A great character.

The stories of the various members of the Spilling police force evolved nicely, and the mix of their story, Amber’s story and the psychotherapists’ narrative worked very well.

I’m a little tired though of the troubled relationship between Simon and Charlie though, and I think it’s time to call a halt. It’s become a little tiresome, and it so clearly isn’t going to work out.

Otherwise though Sophie Hannah was at the top of her game, and Kind of Cruel was pretty much perfect.

An intriging puzzle and a psychological thriller perfectly balanced.

And all I have left to say is – MORE PLEASE!