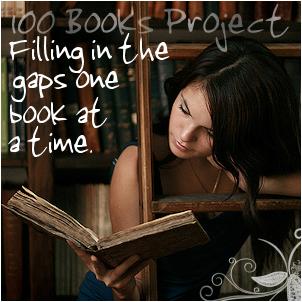 It was a  wonderful idea: pick 100 books that you want to read, but somehow never get around to, and commit to reading at least 75% of them in five years.

It really shouldn’t have taken me more than two years to reach ten books, but it has. I’m too easily distracted by new books, new discoveries, library books …

And I have actually read thirteen books, but three of them I read when I was on a blogging break and I’m not going to count them until I pick them up again and write something about them.

But, for now, here are my first ten books:

Nightingale Wood is a fairytale says the cover, and yes it is. The story of Cinderella, set in the 1930s, still recognisable but twisted into something new and something just a little bit subversive.

It is a stunning portrait of one woman’s descent into madness. And a clear indictment of a particular society’s oppression of women. So much has been and could be written about The Yellow Wallpaper. But I feel so deeply for its narrator that I cannot write about her words intellectually.

Fifteen year old Doria’s life is far from perfect. She lives with her mother in a tower block on the outskirts of Paris. Her father has returned to his Moroccan birthplace to find a new wife who will provide him with the son he so badly wants. And so mother and daughter are left to subsist on the meagre wages that a woman who doesn’t speak the language can earn as an office cleaner.

A Concise Chinese-English Dictionary for Lovers by Xiaolu Guo

Her impressions and experiences as she found her feet in London were wonderfully observed, and her use of language illuminated the gulf between Chinese and English in a way that was both beautiful and clever. I was also struck by the bravery of anyone who travels alone to a country with a very different language that they hardly know. A country so different, so far from home.

We Have Always Lived in the Castle by Shirley Jackson

Merricat (well how would you abbreviate Mary Katherine ?!) is a quite wonderful narrator – engaging, unreliable and utterly unique. And her tale is quite extraordinary. But I’m not going to say too much about that tale. Much has been written already. And if you haven’t read the book you really should. And you will enjoy it more for knowing little beforehand.

Melanie thinks she is in a nightmare. She tries to wake up, but she can’t. This is real. She is trapped and helpless. Marghanita Laski conveys her feelings quite perfectly. The atmosphere is claustrophobic, and deeply unsettling. And the more you think the more unsettling it becomes.

Loitering With Intent by Muriel Spark

The Autobiographical Association? It’s the brainchild  on the supremely pompous Sir Quentin Oliver; a society that will support and assist people in  writing their biographies and preserving them until all of those mentioned are dead so that they can be safely  published. Because, of course, they will be of interest to the historians of the future!

It was so, so easy for Cassandra to cast herself and Jane Eyre and Marion as Mr Rochester. But reality would prove to be a little different.

The Man in the Queue by Josephine Tey

Elements of the modern police procedural can be seen, but this is very much a book of its time. The language, the world it describes tie it to the 1920s, and references to the Great War emphasise its lasting impact on a generation. I was caught up in that world, and with Inspector Grant and his investigation.

The Ladies’ Paradise by Émile Zola

It is an almost magical emporium, a huge department store that grew from a small draper’s shop, packed full of seductive colours, fabrics, clothes, furnishing, and so much more. The descriptions are rich, detailed, and utterly captivating.

Now I’ve perused my list again I have been inspired, so expect the next ten to arrive much more quickly.

And if you see a book you particularly loved on there, do say!