February 21, 2012 By Fleur in her World in Book Reports Tags: Sarah Gristwood 1 Comment

That lovely cover caught me first, and when I read an opening that was just as beautiful I was completely captivated. 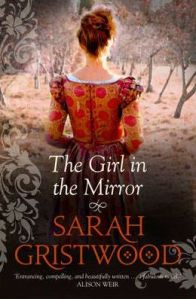 “Sometimes I think I can feel the garden, like a prickle of awareness on my skin, as if sight – and smell, and sound – were not enough and I want to wrap myself in it, like you wrap yourself in fur on a winter’s day. I suppose those times should come most often in the mayday, the hay day. when the roses and the fleur du luce and the honeysuckle are in flower. When, in the knot gardens of my childhood, gillyflowers jostled strawberries, with the fruit already beginning to show.”

I found myself drawn into a story set in the latter days of Elizabeth I.

And into the story of Jeanne.

She had been orphaned when she was just five years old and left in the care of Jacob, a gardener and a family friend. He had no idea how to bring up a girl, but he had nowhere to turn. And so he dressed her as a boy, treated her as his apprentice, and taught her everything he knew …

When Jacob died Jeanne was alone in the world. She kept her disguise –  she knew that she would be safer that way – and found a position in the household of Robert Cecil.

Jeanne struggled with divided loyalties. And then she realised that she was in terrible danger …

“I do not actually watch as the Queen raises her arm and unclenches her fingers, letting the glove fall solidly to the sand, heavy with its embroidery. I make a mental note to see that, this time, they clean it carefully. How many accession days is it now? It can;t be far off forty, though in the beginning we didn’t celebrate them this way. Once, long ago, we gave her such a wisp of a thing to throw that the wind all but whipped it away, but after this many years we’ve learned to do these things properly.”

“I have no appetite for this any more. There may once have been a moment when some tiny, surreptitious part of me would have expected to enjoy seeing Elizabeth humiliated – a moment when she was asking the whole court whatever she would do without her little pygmy. But I’ve supped too full of humiliation over the years to want to taste the dish again, even vicariously …”

“‘She always forgives me.’ He jumped up and began striding around the room. An inkwell on the desk clashed to the floor: the very force of his convictions must make him clumsy. The guard stuck his head around the door in alarm, ignoring the spreading stain on the floorboards …”

It’s a very clever selection, avoiding the obvious choices, and allowing all of the characters, the story, the history to shine.

The characterisation is flawless, and the author so clearly knows and understands the history.

The story moves slowly at first, but the pace builds until finally everything comes together in a dramatic conclusion.

I was almost completely captivated, but I did wonder how Jeanne managed to keep her disguise, how she coped with all of the practicalities, why nobody ever said anything …

So not quite perfect, but still a lovely, undemanding historical novel.

It was lovely to step back into Tudor England, to look around beautiful gardens, to watch the seasons change, and to see the human side of history so very clearly.