February 5, 2012 By Fleur in her World in Book Reports Tags: Katy Darby 8 Comments

The cover caught my eye first. It was so very vivid, and so very Victorian. 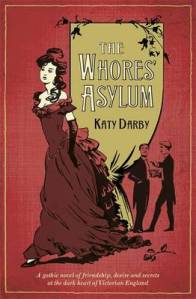 Inside I found a letter. A letter written in 1914. A letter from a dying father to his son.

“Six months ago I would not have had you know anything that might distress you; but you are a man now, and have seen blood and killing, and death at Marne, and at Ypres, more than I ever did or hope to; and you deserve to know the truth about myself, your mother, and your namesake, Stephen Chapman, the best and bravest friend I ever had.”

The truth was set out in five documents, and some ephemera.

In 1887 Edward Fraser,  Cambridge graduate who has chosen to continue his theological studies at Oxford, shared rooms with Stephen Chapman, a medical student. The two men were very different, but they became close friends.

Edward was concerned when Stephen began to starts to work a shelter for fallen women. And his concern grew when he found that Stephen was falling for Diana, the lady who ran the shelter.

Edward had known Diana in Cambridge and her behaviour, and the dramatic events that ensued, gave him good reason to be wary of her.

And so the question was posed – who was Diana?

Was she an evil schemer?

Was she a fallen woman who had risen?

Or was she a good woman who had been terribly wronged?

The answer comes in the last of the fifth document. Diana, fearing that she will die in childbirth, sets down her extraordinary story for her unborn child …

Katy Darby writes wonderfully readable prose. She brings Victorian England to life, and paints vivid  pictures of dark streets and of the dark side of high society.

I saw a rich cast of intriguing – and ambiguous – characters.

I was captivated as the different elements of the story unfolded, but I do that it had been told differently.

The use of letters and documents works for some stories, but it also consigns them to the past. This is a story that would have gained so much if only it had been allowed to live and breathe.

The Whores’ Asylum is a fine entertainment, but I’m just a little disappointed because I saw the potential for more.

Maybe I’ll find it in whatever Katy Darby writes next …