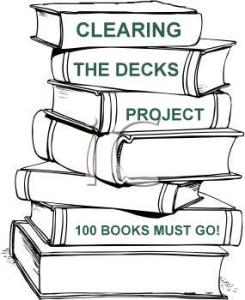 I am creating a home library of the books that I think I can let go after reading, or maybe let go without reading at all for my Clearing the Decks Project

The project began last year with one hundred books. By the end of the year forty books had left the premises last year, and so I’m adding forty more for 2012.

I’m introducing the books ten at a time, and so here are ten more.

Valerie O’Connor comes from a large, close- knit, working class family in Vermont. At the age of eighteen, she marries twenty-five-year-old Jack Marsh. He is a handsome, dashing Korean War veteran, but he is also a damaged man who cannot keep himself from taking his fears and insecurities out on his wife and his five children. To make matters worse, Jack takes Valerie away from her family, and all the way across the country, isolating her from the very people who know her and care about her the most. Too proud to ask for help or admit her failure as a wife and mother, Valerie is unable to protect either herself or the children. One by one, pushed to the extreme, the children escape, in one fashion or another, until they are all gone, even Ricky, the youngest and perhaps the most troubled, and there is only Jack left, and Valerie must face the reality of her marriage and her life. And then, as if out of the ashes, another generation begins. Will history repeat itself? The answer is a message for us all.

Seven years ago I moved home to Cornwall. It was definitely the right decision, but I did worry about bookshops. Small local shops, good though they are, can’t offer the same range of books as big London booksellers and I feared that I would miss great books. And so I made regular trips to Waterstones in Truro to discover new books. This was one of them. Fortunately I discovered LibraryThing and book blogs and so I have discovered more books than I ever would have by visits to bookshops alone.

In nineteenth-century Oxford, an extraordinary child is born – Edgar Jones, a porter’s son with a magical talent. Though his father cannot see beyond his academic slowness, his abilities as a metalworker and designer are quickly noticed, and become a source of tension within the family. When Edgar comes to the attention of a maverick professor at work on a museum of the natural sciences, Edgar is at once plucked from obscurity and plunged into the heart of a debate which threatens to tear apart the university. Edgar’s position is a dangerous one – will he be able to control the rebellious spirit that fires his inventiveness, but threatens to ruin him, and to break up his family once and for all?

I borrowed Nightdancing, Elizabeth Garner’s first novel, from the library and loved it. I meant to wait for this one to appear in the library too, but I saw it discounted, it had a lovely cover, and so I bought a copy.

Alabama, 1931. A posse stops a freight train and arrests nine black youths. Their crime: fighting with white boys. Then two white girls emerge from another freight car, and within seconds the cry of rape goes up. One of the girls sticks to her story. The other changes her tune, again and again. A young journalist, whose only connection to the incident is her overheated social conscience, fights to save the nine youths from the electric chair, redeem the girl who repents her lie, and make amends for her own past. Stirring racism, sexism, and anti-Semitism into an explosive brew, Scottsboro is a novel of a shocking injustice that reverberated around the world.

This one caught my eye when it was longlisted for the Orange Prize a couple of years ago. I ordered it from the library, but there was a queue of people waiting behind me and so I had to take it back unread. I meant to borrow it again but it went out of my head until someone requesting one of my books on ReadItSwapIt was offering it. I took the book rather than forget it again!

When the author of The Hayseed Chronicles, Arthur Hayman, is mown down by a concrete truck in Soho, his legacy passes to his widow, Martha, and her children – the fragile Rachel, and Luke, reluctantly immortalised as Luke Hayseed, the central character of his father’s books. But others want their share, particularly Laurie, who has a mysterious agenda of her own that changes all their lives. For buried deep in the books lie secrets which threaten to be revealed as the family begins to crumble under the heavy burden of their inheritance.

I loved the sound of this when I read about it, and when I saw a very cheap copy in a supermarket I bought it. I started reading straight away but I wasn’t too enamoured, and so I pushed it to one side. I’ll try again, and I hope I like it more than I did the first time, but if I’ll accept it isn’t a book for me.

Martin Dressler: The Tale of an American Dreamer by Steven Millhauser

Martin Dressler is the son of cigar maker, born in late 19th century New York. As Martin approaches manhood, it is rapidly clear that his ambitions stretch far further than inheriting his father’s shop, as he moves first to take a job in a hotel, then to open a restaurant, and rapidly ascends to become a builder of hotels of his own. He is a classic entrepreneur, a young man who has the audacity to make his dreams – and the American Dream – come true on the grandest possible scale. But when Martin sets out to build the Grand Cosmos, a hotel that rivals Mervyn Peake’s Gormenghast in its scale, and aims to rival the world itself in its scope, this mesmerising novel finally exposes the ambiguity of the American dream and the perils and wonder of human ambition and human imagination.

I must confess than I can remember buying this one in Books Etc in Charring Cross Road before I moved out of London, which means it has been waiting to be read for more than seven years. It does still appeal, but it has never quite been the book of the moment. Yet…

‘Buy my stepfather’s ghost’ read the e-mail. So Jude did. He bought it, in the shape of the dead man’s suit, delivered in a heart-shaped box, because he wanted it: because his fans ate up that kind of story. It was perfect for his collection: the genuine skulls and the bones, the real honest-to-God snuff movie, the occult books and all the rest of the paraphernalia that goes along with his kind of hard/goth rock. But the rest of his collection doesn’t make the house feel cold. The bones don’t make the dogs bark; the movie doesn’t make Jude feel as if he’s being watched. And none of the artefacts bring a vengeful old ghost with black scribbles over his eyes out of the shadows to chase Jude out of his home, and make him run for his life . . .

This is a new book but I really don’t remember where it came from. And that’s unusual. My thinking is pull it out now so that its ready and waiting for this year’s RIP Challenge.

London in the aftermath of WW2 is a beaten down, hungry place, so it’s no wonder that Regine Milner’s Sunday house parties in her Hampstead home are so popular. Everyone comes to Reggie’s on a Sunday: ballet dancers and cabinet ministers, left-over Mosleyites alongside flamboyant homosexuals like Freddie Buckingham. And when Freddie turns up dead on the Heath one Sunday night there is no shortage of suspects. War Damage is both a high-class thriller and a wonderful evocation of Britain staggering back to its feet after the privations of the War. And in Regine Milner it possesses a truly memorable heroine. She’s full of secrets – just what did happen in Shanghai before the war?

My fiance picked this up for me at a book sale that I had to miss because I had work commitments.

Henry likes to think of himself as a promising jazz musician. The truth, however, is slightly less glamorous. At 18, he’s dropped out of university, lives at home with his bickering parents, and spends most of his time with the family dog. The outlook, it seems, is bleak. So when his brother offers to put him up for the summer in his New York City apartment, Henry leaps at the chance to start living the life of his dreams! But jazz gigs are not immediately forthcoming so Henry lands a job at the Central Park Children’s Zoo. Over weeks spent chopping vegetables and shovelling dung, his world gradually expands to include a motley crew of zoo keepers, doormen and animals of every description. Amongst these, the undisputed star is Newman, the zoo’s stoic Nubian goat, in whom Henry confides his growing love for Margaret, the girl upstairs, like him in town for the summer. As the months unfolds in a haze of jazz bars, ill-advised romance and hard truths about family, Henry learns what it is to love – and to lose.

Another impulse buy, but this time from a charity shop. I wonderful cover caught my eye and I liked the blurb enough to bring the book home.

The Unseen by Katherine Webb

England, 1911. When a free-spirited young woman arrives in a sleepy Berkshire village to work as a maid in the household of The Reverend and Mrs Canning, she sets in motion a chain of events which changes all their lives. For Cat has a past – a past her new mistress is willing to overlook, but will never understand . . . This is not all Hester Canning has to cope with. When her husband invites a young man into their home, he brings with him a dangerous obsession… During the long, oppressive summer, the rectory becomes charged with ambition, love and jealousy – with the most devastating consequences.

I bought this in a library sale not long after it was published, but it got stuck on the bottom of a pile of books and I never quite got to it. I really must!

The Weed That Strings the Hangman’s Bag by Alan Bradley

‘I was lying dead in the churchyard…’ So says eleven-year-old Flavia de Luce – but soon a murder provides a gruesome distraction from her own death… A travelling puppet show arrives in the sleepy English village of Bishop’s Lacey, and everyone gathers to watch a performance of Jack and the Beanstalk in the village hall. But a shadow is cast over proceedings when a shocking murder takes place during the performance – a murder which strangely echoes a tragedy that occurred many years before. For Flavia, undoing the complex knot that ties these strands together will test her precocious powers of deduction to the limit – and throw a revealing light into some of the darker corners of the adult world…

And that’s it for this batch. Any thoughts?

p.s. I’ve had a busy week – a three day course and a car to get serviced, MOTed and taxed – so I’m running behind with a few things. I’ll catch up with myself one day …