January 24, 2012 By Fleur in her World in Book Reports Tags: Clare Morrall 3 Comments

I was charmed and intrigued from the very first page:

“I exist in the eye of the storm, the calm in the centre of a perpetual hurricane of cars and lorries heading for the M6, the north and Scotland, or south to Penzance and Land’s End. I sometimes wonder if they don’t go on the motorway at all, that I hear the same vehicles circling endlessly, a kind of multiple Flying Dutchman, doomed to travel for ever. I don’t regret for one minute that I am no longer one of them.

I call my caravan Dunromin, in the solid tradition of all those semi-detached streets that form the vertebrae of the country, because that’s exactly what I’ve done. Stopped roaming. I’ve anchored myself in the middle of one of the few patches of land where no one goes, among well-established birches, ashes, sycamores, surrounded myself with nettles and claimed sanctuary …”

A story about someone who has steeped to one side of society. That’s something that Clare Morrall writes about so very, very well, and I was eager to read on.

Quinn Smith lived quietly, in a caravan in the middle of a roundabout, close to a motorway service station that offered all of the simple amenities that he needed.

His old-world charm, his unassuming nature, and his inbred politeness  won over the staff.  And so he was able to take advantage of  the washroom,  dined on unfinished meals and rejected produce, and read abandoned newspapers and magazines.

It was a simple, quiet life, but it was knocked off kilter by an eager young reporter from the  local newspaper. She wanted to write a series about unusual people. And wouldn’t the man whose history nobody knew, the man who lived such an unconventional life,  be a wonderful subject?

What she didn’t know was that Quinn had been a child star. 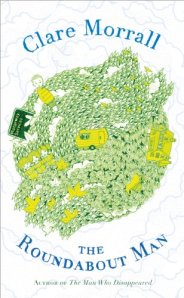 His mother had been a writer. A hugely successful writer of children’s books, starring her children, Quinn and his triplet sisters, Hetty, Fleur and Zuleika.

She had twisted her children’s lives into fantastical shapes.

The books were still loved years after they were written. Academics wrote about them. And visitors flocked to family’s childhood home, turned into a tourist attraction by the National Trust.

The stories were idyllic, and the reality should have been. But it wasn’t.

But Quinn’s mother had little time for her children, or for the fourteen foster children who passed through their lives. There were definite echoes of Enid Blyton …

The consequences – some positive and some negative – of the newspaper story change Quinn’s life, and make him realise that he must look for the answers to questions about his childhood that have troubled him for a long, long time.

The story mixes Quinn’s past, present and future together nicely.

The writing is as beautiful and as perceptive as I had expected, and full of intriguing characters, charming stories, lovely details and bittersweet emotions.

Fascinating questions are thrown into the air. About how we view the past and how it shapes the present. About where the line between fact and fiction lies. About the importance of home and family. And about other things that I can’t quite put into words.

Sometimes the story rambled. Sometimes it became a little too fanciful. And I notices a few loose threads.

But its strangeness and charm kept me holding on. I had to finish a novel that shone such a wonderful light on humanity

The ending was bittersweet and exactly right.

And now I have forgotten the wrong notes and I am happily remembering the notes that rang true.