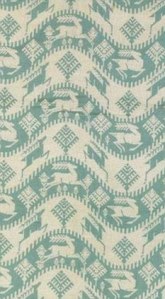 A few months ago, at a library talk, the Persephone Books reissue of Greenbanks was mentioned, and the delight in the air was tangible.

Some had read and loved the book, and all were thrilled at the prospect of another Whipple novel reappearing.

And now I have been to Greenbanks.

While I was there, I watched the story of an extended family, and the story of their family home, from the years before the Great War, through the years of that war, and into the years that followed.

I came to understand their lives, their characters, their relationships, their hopes, their regrets, their emotions …

Dorothy Whipple illuminated their lives quite perfectly, and I was completely captivated.

At the centre of the story is Louisa Ashton, a woman raised with Victorian values and who has found great happiness raising her family and running her home.

And at first her life seemed quite idyllic. The story opened on Christmas day, snow had fallen, and Louisa’s grown children and grandchildren had all gathered at Greenbanks for the festivities.

But I soon saw that Louisa’s life wasn’t perfect. It was real. Louisa loved and supported her family, but they sometimes took that for granted. Her husband was charming, but he was also a philanderer. Her children were caught up with their own lives.

Louisa doted on Rachel, her youngest granddaughter. As she grew Rachel spent much of her time at Greenbanks with her grandmother, and the two formed the closest of bonds.

Rachel’s own home was less happy. Her father, Ambrose, was rigid and controlling, and quite unable to understand that others might not see things in the same way that he did. And Letty, her mother, quietly subverted his wishes where she could, wishing that she could shake off her domestic responsibilities.

But Letty wasn’t brave enough to do anything about it. Maybe that was because she knew what happened to Kate Barlow …

Now, this is the point at which I would love to say much more, about characters, about stories, about themes. But I mustn’t.

Because one of the things I loved about this book was that sometimes stories played out just as I expected them to, but at other times they played out quite differently, and yet in ways that were completely natural and right. Such clever writing.

I’d hate to spoil that for anyone else by giving too much away.

And such beautiful writing. It is cool, it is calm, and it picks up every detail. Every emotion too, without ever being sentimental. Because the author stands back and allows her readers to see, oh so clearly, the humanity she sets before them.

Humanity captured perfectly. With every side of every relationship gently illuminated. With such understanding of marriage, of motherhood, of sibling bonds, of friendship.

Understanding too of how communities work, for good and for bad.

And an era captured perfectly. An era of change, much of it wrought by war, and an era when the lives of women, the possibilities open to them, changed hugely.

One of the great joys of Greenbanks was watching the evolution. From Louisa, who accepted the values instilled by a Victorian childhood. Through Letty and Laura, who saw other possibilities but were each, to some degree, held back. To Rachel, who saw even more possibilities, and reached for them.

There really is so much here, much more than I can express.

Because, through a quiet family saga, Dorothy Whipple has said everything that needed to be said, and she has said it queerly and beautifully.

And although I have left Greenbanks, I know it will stay with me for a long, long time.