October 17, 2011 By Fleur in her World in Book Reports Tags: Deborah Harkness 11 Comments 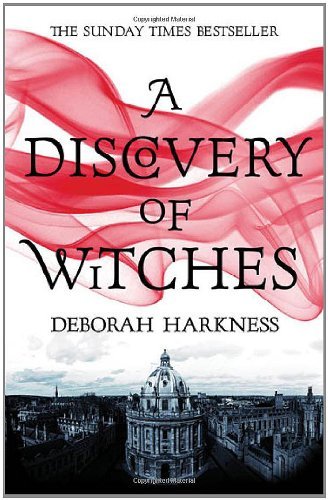 When I picked up A Discovery of Witches, a tale of witches, vampires, daemons and the like, told over 688 pages, I knew that things would go one of two ways. I would either throw in the towel very quickly or I would be swept away and race through the pages.

I’m pleased to be able to say that it was the latter.

I raced through A Discovery of Witches and, though it had failings, I loved it anyway.

It helped, I’m sure, that the story began with a book in a library.

“The leather-bound volume was nothing remarkable. To an ordinary historian it would have looked no different from hundreds of other manuscripts in Oxford’s Bodleian Library, ancient and worn, but I knew there was something odd about it from the moment I collected it”.

That book was requested by Diana Bishop, a historian from Harvard, who is visiting Oxford to further her research into the history of alchemy.

That book had been long-lost, but it reappeared because Diana is also a witch.  A witch descended from long and distinguished line, going back to the Bishops and Proctors of the Salem Witch Trials.

That book drew out the magical powers that Diana had long fought to suppress. And it drew the attention of others – witches, vampires, daemons – who all wanted the knowledge it held, and would go to extraordinary lengths to get it.

It soon became clear that Diana was in serious danger.

Matthew Clairmont, a distinguishes academic and a vampire since the early middle ages, became her protector. He had beauty, elegance, taste, wealth, and centuries of experience and knowledge to call upon. But he was a vampire, with all that entails.

Diana and Matthew completely contravened the ancient laws concerning relationships between different creatures, as they fell in love, as they struggled to evade their enemies, as they tried to uncover the secrets contained in that mysterious book …

The mixture of history, mystery, adventure and romance was wonderful.

Deborah Harkness writes very well, and it is clear that she has done so much research, that she loves what she writes, and that she has attended to every detail.

The world that she has created is so rich and perfectly realised. Characters, locations, cultures – everything!  I found so much to love as the story unfolded and the big picture grew and grew.

I loved the juxtaposition of the mundane and the fantastical: witches on yoga mats, for example!

I loved the myriad possibilities were opened up by some very clever plotting.

And most of all I loved the wonderful storytelling and the world I was drawn into.

At times the story got bogged down: a few too many romantic clichés, a few too many irrelevant details. But I held on. Because I was enjoying a wonderful entertainment. Because I never stopped wanting to know what would happen next.

I was hooked until the very end. An ending that is also the beginning of a bigger story.

It left me still wanting to know what happens next, so roll on the second book in the trilogy!