October 9, 2011 By Fleur in her World in Book Reports, Fictional, it has intrigue, mystery and suspense, it speaks of the here and now Tags: Erin Kelly 6 Comments

I picked up The Poison Tree last year, from the new books shelf in the library. It wasn’t a book I knew anything about, but striking design and a blurb that referenced both Rebecca and The Secret History pulled me in.

Sadly though, the story didn’t hold me. It was told in the present tense and it seemed to be walking a well-trodden, maybe over-trodden path. I gave up after a couple of chapters, and took the book back to the library.

Some months later I began to read more about The Poison Tree. Many words of praise, and I was told that there was a very good reason for the present tense narration. I decided to try give Erin Kelly another chance. And so, after liking that second novel I went back to her first. 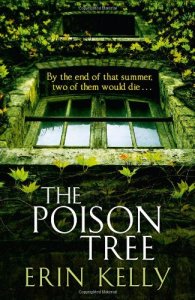 Karen was a gifted student coming to the end of her degree course and pondering what to do next, how to make her first step into academia.

And she was very much alone. She was the only child of proud, conventional parents who couldn’t quite understand the opportunities opening up for their daughter. And her housemates were moving on, with Karen no longer part of the group since being dumped by her boyfriend. He and his new girlfriend were absorbed into their circle instead.

And Karen fell into a different circle. The circle around Biba, a drama student, a free spirit. She happily accepted Biba’s invitation to move into the house that she shared with her brother, Rex, and a changing band of lodgers.

Karen lived the kind of hedonistic, bohemian student life she had missed out on, and a complex relationship developed between her and the sister and brother she lived with.

But her new circle was horrible unstable, rocked by Biba’s unorthodox, unthinking behaviour. It was easy to see that something would go horribly wrong, but difficult to see how, where and when. And, in the end, it did. Before the end of that summer lives would be changed forever.

Ten years later Karen would still be living with, dealing with, the consequences of that summer. Living with a man newly released from prison and struggling with his situation. Bringing up their child. Trying to keep the past buried, and secrets hidden.

After just a few chapters the story had me hooked, and it held me to the end.

Erin Kelly balanced the past and present stories beautifully, letting them twist and turn, letting so many possibilities open up, and revealing facts at just the right points. Her handling of the plot was masterful, and her writing was pitch-perfect.

Her characterisation was just as good. I understood Karen completely, and her voice always rang true. Biba was horrible spoilt, horribly selfish, and, though I disliked her, I was fascinated. And Rex, bright but so very neurotic, inspired annoyance and understanding in equal measure. Every character was so well drawn. I believed in them all.

Their world came to life.

The story of the present was not as strong as the story of the past, and I’m afraid I had doubts about the way some of the relationships and situations evolved. Nothing absolute, but a few things felt wrong.

But none of that stopped the story from holding me. I needed to keep turning the pages, to find out what happened.

I was rewarded with a striking final revelation and a wonderfully dramatic ending.

And now I can say that Erin Kelly’s first book was good, that her second book was better, and that I am looking forward to her third.