I have been spending a bit of time recently tidying bookshelves.

I used to be very efficient at logging new books into LibraryThing, so that I knew exactly what I had and exactly where to find it. But I’m afraid I let things slip. Silly, because it took so little time and the benefits were huge.

And so I have been going through bookcases and boxes, making sure everything was in LibraryThing, clearing out books that I didn’t really need to keep, and generally putting things straight.

First I attended to my Virago bookcase. I had gone on cataloguing my VMCs, but I did find a duplicate and a couple of books that had slipped through the net/

Next came the smaller Persephone bookcase. I was pleased to find that all my Persephones were catalogued, and now they are all neatly shelved in series order.

And yesterday I started on a bigger job. The bookcase that holds all of my old orange and green Penguins, and books from other publishers of a similar size and vintage.

I knew that a lot of these were uncatalogued and the shelves were rather muddled. And so I pulled all of the books out and arranged them on the floor. Piles for authors when I had a number of their books, and piles by imprint when I didn’t.

And here they are: 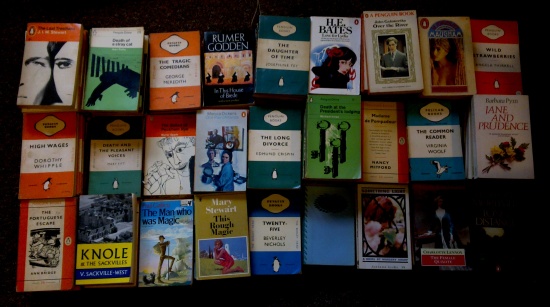 It was lovely to see them all, out from behind the glass, and to add a few new acquisitions.

I have wanted a copy of The Last of the Tresilians by J.I.M Stewart (aka Michael Innes) ever since Karyn wrote about it, and last week I finally spotted a copy at a sensible price. I snapped it up.

I had completely forgotten that I owned Murder in Time by Elizabeth Ferrars. I bought it some time ago because I’ve enjoyed her books before and because the synopsis had echoes of one of Agatha Christie’s best known books.

See what you think:

“Nothing could sound more innocently gay – or fantastically extravagant – than a flight on a specially chartered plane for a weekend in Nice. But most of the nine people Mark Auty invited suspect some sinister intention. Why, then, did they accept? For accept they did. Coming from such far-removed places as a pub on the edge of Dartmoor, a quiet Oxfordshire village, a Soho nightclub, to gather for the journey in mark’s Surrey home. Why Mark asked them and why they accepted are questions that are only answered in full after murder has intervened…”

I hadn’t forgotten, I could never forget, my little orange Penguin copy of High Wages by Dorothy Whipple. I was utterly thrilled when I found it, at a very reasonable price, long before the Persephone reissue.

Knowle & The Sackvilles by Vita Sackville-West is another recent arrival. I caught it on ReadItSwapIt. Sometimes I curse the swapping system, when nobody with a book you want wants anything of yours, but sometimes it works beautifully. Somebody asked for my discarded crime novel and had an out of print gem that I could take in exchange! I have Fancy by Monica Dickens on the way too in a similar swap.

I discovered, from LibraryThing, that A Conoisseur’s Case and The Crabtree Affair by Michael Innes were the same books, and that the former was the UK title and the latter the US. Why do publishers do that?!

I found a book by Gladys Mitchell that I had completely forgotten. It was in a bargain bin and it was almost worth buying just for the title: Twelve Horses and the Hangman’s Noose.

And I found my Penguin copy of The Brontes Went to Woolworths by Rachel Ferguson. I must confess that when I bought it I already had the Virago edition and the more recent Bloomsbury Group edition. But it is such a wonderful book, and the Penguin copy was so tatty, so in need of love, that I had to bring it home.

In the end all of the books were catalogued, and now they are back on the shelves.

Other jobs were calling, and Briar likes peace and quiet when she settles down between the bookcases in the evening …

So that’s my three specialist bookcases organised, and tomorrow I start on the rest of my collection!