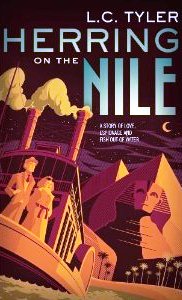 Hooray for the return of Ethelred and Elsie!

I anticipated a clever mystery and a fine entertainment, and that’s just what I got.

Ethelred is a middle-aged crime writer, scraping a living by writing three different series under three different aliases. Or rather he was. Ethelred has received an unexpected inheritance. He has a new lady friend too. And those facts might just be linked…

He books a Nile cruise: a holiday with his new love and a research trip for a new novel. But then he is jilted.

Elsie, his literary agent, is quick to invite herself along for the trip instead. But it is a decision she lives to regret.

There are threats, murder, kidnapping, and terrorism. There are misunderstandings, mistaken identities, and much confusion. And there are twists aplenty.

Yes, there’s plenty of plot. And a fine cast of characters to play it out.

And there’s more: intelligence, wit and lovely details. Too many wonderful things to pick out, but I must commend Ethelred for continuing to provide answers to the interview questions from local newspapers at Elsie’s behest. They reflected his changing circumstances, they reflected his life as a writer, and they were an absolute joy.

The similarity of the title of this book to a certain novel by Agatha Christie is not a coincidence. There are echoes of that story in this book, but there are differences too. it is a fine tribute, but a fine book in its own right too. Not a pastiche, but a modern novel following in a fine tradition.

I had a lovely time travelling with Ethelred and Elsie, and I’m hoping to meet them again in the future.