June 30, 2011 By Fleur in her World in Challenges Tags: Elizabeth Gaskell 5 Comments 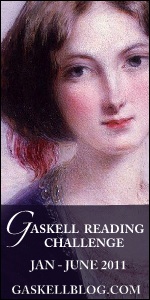 I was delighted when Katherine of Gaskell Blog introduced The Gaskell Reading Challenge.

You see, for many years I felt that I would enjoy your books, and yet I never picked them up. And then, when the BBC adaptation of Cranford was aired, my mother asked me if I had ever read it. I said that I hadn’t, and she told me that she had studied it for ‘A’ Level English, and that it was a wonderful book.

We both loved the adaptation, and I was struck by the comments that my mother made about the characters and the changes that had been made. I should explain that my mother’s short-term memory is very poor and, though she still loves the idea of books and is always interested in what I am reading and what books are coming into the house, she lacks the ability to retain details of plot and character and so she very rarely finds a novel that can hold her interest. And yet Cranford came back to her after nearly fifty years …

But what to read next?

I was still pondering that question when Katherine came along with her challenge.

I signed up, but I still couldn’t make up my mind. It was soon made up for me though, when I saw that there was to be A Group Read of The Moorland Cottage.

I thought that I had a copy tucked away somewhere, and indeed I did. I pulled it out, I began to read and I was completely captivated. I even wrote a few posts along the way, but then disaster struck. The book vanished! I searched high and low, but there was no sign of it. And I was so cross with myself for losing the book that I forbade myself from ordering it in from the library.

But one day, when I was looking for something else entirely, I found my book tucked away in my mother’s knitting basket. I really should have known that the name Gaskell would catch my mother’s eye, and I know now where I should look first the next time a book disappears.

The story and the characters had stayed with me, and so I was able to pick up the threads so easily and read to the end.

I really did intend to write a little more about The Moorland Cottage, but I’m afraid I haven’t yet. I think I’m going to read it again, right through, and then it will be time to write.

And after the Moorland Cottage I read North and South. It was a book that had been calling me for a very long time, and it occurred to me that I could involve my mother.

I pulled the book from the shelf and I ordered the DVD of the BBC adaptation from the library. I started the book first and always read ahead of the DVD, as I wanted my first impressions to come from the original material. And we watched the DVD over several nights.

I loved the book. At first I saw similarities to The Moorland Cottage, but North and South very soon grew into something bigger and more powerful.

And we both loved the dramatisation. I saw a number of changes from the book, but they were changes that I could understand and accept as necessary to make North and South work in another medium.

I’m thinking that maybe later in the year I will order the DVD of Wives and Daughters so that I can share that book with my mother in the same way.

But that’s for the future.

For now, my reading challenge is done and all that there is left for me to do is go away and ponder just how to express my feelings about two wonderful books …