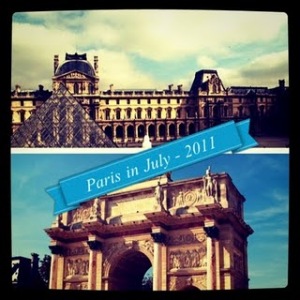 That’s Paris in July, hosted for a second year by Karen at Book Bath and Tamara at Thyme for Tea.

A celebration of the French capital, taking in books, cinema, music, food … and I’m also thinking about a little knitting.

I’ve been pondering books for a while now, and I have come up with far more wonderful possibilities than I could ever read in a single month.

There are the older classics

I have never read any Balzac, but I had to order Cousin Bette from the library when I read Lyn’s wonderful review.

That reminded me that I’ve been meaning to read more Zola for a very long time. I can’t remember whose review I read, but I was inspired to take a another look at Thérezè Raquin. I read it years ago, and I’m sure it is a book that I might see differently now that I am a little older, but I do wonder if it is a winter book rather than a summer one. And then at the weekend I read the news that the writer of the television adaptation of Lark Rise to Candleford is working on an adaptation of The Ladies’ Paradise. It’s a book I’ve been meaning to read for ages, I definitely must read it before seeing the (anglicised) adaptation, and the cover of the Oxford World’s Classics edition is so lovely …

And then there’s Dumas and The Count of Monte Cristo. I’ve been slowly working my way through this vast and wonderful tale, and I am sure July will see a little more progress.

There are some wonderful classics from the 20th century.

I read Gigi by Colette for Paris in July last year, but I didn’t get to the second novella that came with it in my edition. So The Cat is a definite possibility for this year.

Nightwood by Djuna Barnes is another book I lined up last year but didn’t get to. So I’m lining it up again.

Tracy mentioned Summer Will Show by Sylvia Townsend Warner, and so I pulled out my copy. It does look interesting, but I’m not sure. I tend to think that STW is not as good at novels as she is at short stories. But I’d be happy to proved wrong.

I have a few historical novels from the lovely Gallic Books to hand too. 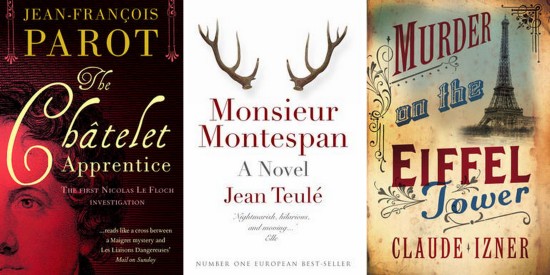 There’s The Châtelet Apprentice by Jean François Parot – crime at the carnival in 18th century Paris. it looks wonderful, and the library has the next book in the series, so I should really read that one before the next one disappears from the shelves.

I have already started Monsieur Montespan by Jean Teulé, that story of the cuckolded husband of Louis XIV’s mistress. I had to put it to one side to catch up with library books and the Crime Fiction Alphabet, but I am eager to pick up the threads of the story again.

Murder in the Eiffel Tower by Claude Izner is another historical mystery, and the start of another series. A bookseller is caught up in the investigation of a strange death at the Universal Exposition of 1889 …

I have two books sitting on the dining table, where I keep books that are at the top of my list of priorities.

Conditions of Faith by Alex Miller won awards when it was published ten years ago, and it is being reissued on 1st July. I have only read the first page, but I am already beginning to understand why.

I have read much praise for 13, rue Théresè by Elena Mauli Shapiro, a story inspired by being left in possession of a box of mementoes whose owner had died, and I love the concept.

And I must find time for some non fiction. I have two books waiting on my own shelves, and one that I picked up from the library today.

Liberty by Lucy Moore tells the story of four women caught up in the French Revolution.

When I remembered The Cat I also remembered that I had a copy of Judith Flanders‘ acclaimed biography of Colette.

And I will definitely be reading Coco Chanel by Justine Picardie. I was intrigued by the extracts published in The Telegraph a while back, and I was thrilled to spot this one in the library this morning.

So I have a wonderful pool of books to choose from, and I’m sure I will discover more when Paris in July arrives.

There will be films and music too, but I’ll write about that another day.

Do you have plans for Paris in July? Or recommendations maybe?