Sometimes I finish a book and I know exactly what i want to say, but there are times when I can think of nothing beyond what the book is about and how much I liked it.

I finished The Body on the Beach by Simon Brett, the first of his series of Fethering mysteries, weeks ago but it has taken me until now to formulate my thoughts.

They start in the form of a simple recipe:

Just a slight variation from the norm, but it works quite well.

The story opens in Fethering, a town on the south coast of England. Not the traditional country village, but a small town that grew so that old houses in the centre were surrounded by desirable modern developments, and rather less desirable council estates. I live in a similar town, rather further down the south coast, and I have to say that the picture Simon Brett painted rang absolutely true. 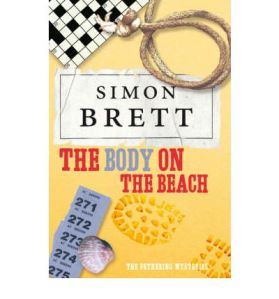 Fethering was the sort of town people retired to. And that was exactly what Carole Seddon did when she took early retirement after diligently doing her duty for many years at the Home Office. She settled into a quiet and sensible routine.

Until early one morning, walking her dog on the beach, she found a body. naturally, she went home and called the police. But when the police arrived they told her that there was no body. Carole found herself dismissed as an attention seeker, an over imaginative old lady, and she didn’t like it one bit. But nobody believed her, so what she could do?

Well, she spoke to her new neighbour. Jude is Carole’s opposite, a free spirit completely oblivious to the conventions of a small town like Fethering. And she suggests that she and Carole make some investigations of their own.

And investigate they did. They spoke to many of the good people of Fethering and, through a mixture of deduction and luck, they found out what had happened.

It was a rather predictable mystery, there were no great surprises, but it was nicely constructed and very readable.

That was due in no small part to it being such a human story. A diverse cast, from right across the age and class spectrum, brought both town and story to life.

I realised that Simon Brett was a very clever writer. Using the third person and moving the perspective back and forth between Carole and Jude was a very wise decision. And he balanced entertainment, mystery and social commentary very nicely.

His masterstroke though was his detective duo. Though they were very different I saw what they had in common, what they needed from each other, and how that would hold their friendship together.

And there were signs that Carole might unbend a little, not stick quite so firmly to social conventions. That Jude might have an interesting past to discover, secrets to reveal.

I’m curious to meet them in the next book in the series, but hoping that the mystery might be a little stronger…