April 20, 2011 By Fleur in her World in Book Reports Tags: Agatha Christie 4 Comments 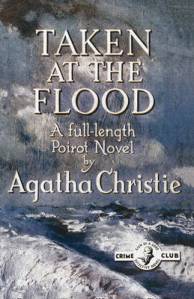 “We at the height are ready to decline.
There is a tide in the affairs of men
Which, taken at the flood, leads on to fortune;
Omitted, all the voyage of their life
Is bound in shallows and in miseries.
On such a full sea are we now afloat,
And we must take the current when it serves,
Or lose our ventures.”

I couldn’t resist picking up a lovely facsimile reprint of the first edition of Agatha Christie’s Taken at the Flood. A lovely cover, a story that I couldn’t recall either reading or watching, and that wonderful Shakespearean epigraph.

A few weeks after marrying an attractive young widow, after a whirlwind romance, Gordon Cloade is killed in an air raid.

A tragic loss, and there is a second blow to the family. There was no valid will, and so Rosaleen, a widow for the second time, was left in possession of all her husband’s wealth.

Gordon had always supported his family and his widow would have done the same, but her brother stopped her. And David told her that they should stand on their own two feet, as the two of them had always done.

The Cloades would see no money during Rosaleen’s lifetime. Only when she died would the estate revert to them.

They struggled to manage in the economic downturn that followed the war.

And so David was unpopular with the Cloade family. But one of them, Lynne, a demobbed WREN, understood his point of view, agreed with him. They were drawn together.

And Lynne began to have doubts about her engagement to her cousin Rowley. He was a farmer, a reserved occupation, and so he hadn’t been away to war like her. Maybe she had changed. Maybe they had grown apart.

All of this is set out wonderfully. The characters are beautifully drawn, the period is caught perfectly and there are definite story possibilities.

And there is more.

A story becomes known. That Rosaleen’s first husband, Robert Underhay, had spoken of disappearing, faking his own death, to set his wife free. And then he had spoken of starting a new life with a new name. Enoch Arden, after the hero of Tennyson’s poem.

An Enoch Arden arrives at the village inn. And shortly after he is found dead …

Hercule Poirot is drawn into the case: he heard the story of Robert Underhay being told and he has been consulted by one of the Cloade family.

An intricate and very clever mystery, with lots of lovely details, unfolds. And it is a mystery driven by the characters. As facts about them, and about what happened,  emerge. I reevaluated them and I rethought what might have happened.

Everything worked beautifully until the end. I can’t say why, but I felt a little cheated by the resolution of the mystery. Though the epigraph did fit …

And then there is a final twist. The concept was perfect, but I’m afraid the execution was  a little melodramatic.

Taken at the Flood works beautifully as a character study and a period piece, it’s just that the mystery creaks a little.

Yet it held my attention from start to finish.