March 13, 2011 By Fleur in her World in Book Reports Tags: Araminta Hall 4 Comments 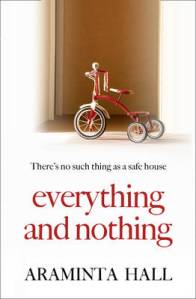 “The tube spat Agatha into one of those areas where people used to lie about their postcodes. Although why anyone ever would have been ashamed to live here was beyond Agatha’s understanding …”

Ruth and Christian are struggling to balance their busy, busy lives: juggling demanding careers, patching up a marriage battered by his affair, a five-year old daughter who won’t sleep, and a three-year old son who won’t eat.

But then there is Agatha, a veritable Mary Poppins. She arrives as a potential new nanny to be interviewed finds a house and a family in chaos, but she takes it all in her stride, quickly calms the situation and then settles down to play happily with the children.

Her references are impeccable, and she is available immediately.

Does that sound a little bit too perfect? Of course it does!

Araminta Hall makes it clear from the very start that Agatha’s motives are questionable to say the least.

Life moves along with one problem seemingly solved, but others still looming.

The plot is nicely managed, with some twists predictable and others not, and with the author cleverly building up the tension without ever drifting into melodrama.

It works because the characters of Ruth and Christian, and indeed their troubled relationship,  are so well drawn, and the psychology spot on.

I feared that she was on the verge of a breakdown as she struggled to keep on top of far too many things, and I wanted to scream at her to accept that she wasn’t superwoman, and that she needed to rethink her priorities.

And he I could have cheerfully strangled, as he so often failed to understand and take responsibility as an adult. But he could learn. Couldn’t he?

So many conversations and incidents rang completely true.

And along the way I found some profound truths about parent child relationships, and about how being a parent, however much you may love your children, doesn’t make you infallible, doesn’t mean you know how to cope.

There really were moments when the dialogue just stopped me in my tracks.

The character of Agatha was, I’m afraid, a little more troublesome. It’s a difficult on to explain without giving away crucial plot points, so I’ll just say that I so very nearly believed in her, but not quite.

Her character was compromised by the conclusion. I believed in how she got there, but what she did in the end just didn’t ring true.

You see, Everything and Nothing is being marketed as a thriller, and it works as a thriller. For me though it worked even better as a contemporary human drama, and I felt that having the conclusion play out as a thriller compromised that more interesting side of the story.

It was a good conclusion, and I was gripped until the very end, but ultimately it made the book a “great” rather than a “wow.”

Everything and Nothing is a thought provoking, and very, very readable debut novel. And, on the evidence of this book, I fully expect Araminta Hall to write a “wow” book before too long. I’ll certainly be watching out for it.