March 8, 2011 By Fleur in her World in Book Reports Tags: Arto Paasilinna 9 Comments 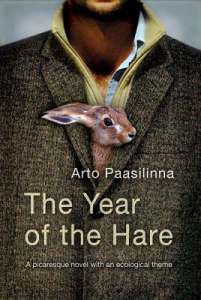 Could you resist that cover? I couldn’t!

And when I saw that this little book was a bestseller in the author’s Finnish homeland, that it had been translated into umpteen languages, and that it had even been selected for the UNESCO Collection of Works I thought that I might just be on to a winner.

It all starts so simply. It is late in the day and a journalist and his photographer are driving home across country, They pull up when they hit and injure a young hare. Vatanen, the journalist pursues the hare into the forest. And he doesn’t come back. Eventually, the photographer decides the he must leave without him.

Meanwhile, in the forest Vatanen finds the hare, nurses it, and gradually wins its trust. And he makes a decision. To break free of his dull life, his stagnant marriage, and live a simpler life, travelling through the country, picking up casual jobs to fund essentials, and appreciating the world around him.

The writing was simple: plain, clear prose, and short, sharp sentences. The idea seemed simple. But the story wasn’t so simple, there was plenty more to come.

Man and hare traveled together, encountering all manner of people. And many different reactions to the hare.

One man goes out of his way to help Vatanen find food for his companion. A woman oohs and aahs. One man is determined to but the hare, another is equally determined to separate man and beast, to uphold the law, to normalise the situation. And a priest fetches his shotgun when he finds droppings in his church …

Each and every reaction says something about human nature, and human society.

There are adventures too, as the story moves from the realism of the opening to something that I can only describe as picaresque: forest fires, pagan sacrifices, military war games, killer bears and much more.

Living a simple life is not so simple.

Events built to a dramatic conclusion. What did it all mean? I think I know, but I really shouldn’t say.

The story moved along nicely, with wit and intelligence ever-present, becoming stranger. The characters were vivid, the places wonderfully evoked. I almost believed in the bond between man and hare, the man maybe replacing the young animals parents, effectively making it a pet.

Almost, but not quite. I can’t really explain why but something didn’t quite ring true. The hare was too docile, too in thrall to the man, and I don’t think I wanted to believe that such a beautiful, secretive, wild animal could be pulled so easily into our human world.

And that might be why The Year of the Hare was always a story I watched rather than a story I could become involved in.

It was a book I could appreciate and admire, but I book I couldn’t quite love the way that I thought I might.