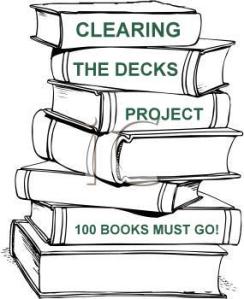 So I’ve selected a hundred books from the ridiculous number that I have unread. Books I want to read but probably don’t need to keep. Those books are now my home library, to be chosen from when I need a book but don’t have one in hand. And, like library books, passed along once I’ve finished with them.

I’m introducing the books ten at a time and at the end of each quarter I’ll report on my progress.

Things to Make and Mend by Ruth Thomas

“As teenagers, Sally Tuttle and Rowena Cresswell were inseparable – united in teen angst and scorn for needlework lessons – until a devastating incident destroyed their friendship. Now both single mothers in their early forties they are haunted by memories of their lost intimacy. When Sally, now a faithful employee of In Stitches repair shop, unexpectedly wins an embroidery prize and is invited to speak at a conference in Edinburgh, it seems she has a chance to recapture something of her old, lost self.”

This was offered in exchange for one of my books on ReadItSwapIt. I loved the title, I liked the sound of the story, and so I took it. The first time I picked it up it didn’t grab me, but I think I just chose the wrong moment.

“Marya’s Aunt Rebecca has died, leaving Marya five million dollars on the condition that Marya live in her house for a year. But this house is both remote and unwelcoming – it’s packed with icons of the Blessed Virgin, ceramic images of female saints, and hidden relics like an ancient nun’s habit, a shining tangle of red-gold human hair, and a blood-spattered wedding dress. What drama has been played out in the house? And what is its legacy?”

This one came from the wonderful, and sadly missed, Murder One Bookshop in Charing Cross Road. A mystery in a gothic mansion published by the wonderful Women’s Press was simply irresistible, and I have no idea why I haven’t read it yet.

“In 1899 William McQuiggan leaves his young Australian wife and new-born twins in New Zealand and travels to America in search of God. Belief is the story of his journey and of his marriage to Myra, who follows him from Auckland to Salt Lake City, Utah, and to Zion City, Illinois. With each leg of the journey the family grows until William is the reluctant father of six, and Myra’s understanding of her husband deepens and matures. Belief is a vivid evocation of a way of life that has passed, a tale told on a grand scale: the story spans seventeen years, three countries and three religions. More than that, it is the story of how love and patience may triumph over violence and despair.”

This one came from another wonderful bookish emporium in Charing Cross Road – Any Amount of Books. It looks lovely, but it’s been tucked away in a box in the attic for years.

The Other Hand by Chris Cleave

“We don’t want to tell you too much about this book. It is a truly special story and we don’t want to spoil it. Nevertheless, you need to know something, so we will just say this: It is extremely funny, but the African beach scene is horrific. The story starts there, but the book doesn’t. And it’s what happens afterwards that is most important. Once you have read it, you’ll want to tell everyone about it. When you do, please don’t tell them what happens either. The magic is in how it unfolds.”

One of those books that had so much attention that I picked up a copy from a charity shop, intending to find out what all the fuss was about.

“Edith Lavery is a woman on the make. The attractive only child of a middle-class accountant, she leaves behind her dull job in a Chelsea estate agents and manages to bag one of the most eligible bachelors of the day – Charles Broughton, heir to the Marquess of Uckfield. But is life amongst the upper echelons of ‘good’ society all that it seems? Edith soon discovers there’s much more to the aristocracy than dancing in Anabel’s, shooting small birds and understanding which fork to use at dinner. And then there is Charles’s mother, the indomitable Lady Uckfield, or ‘Googie’ to her friends, who is none too pleased with her son’s choice of breeding partner.”

I waiting for a long time for this to turn up in the library, but it never did. And so I picked up a copy in a charity shop.

By The Light of Falling Stars by J Robert Lennon

“The crash of an airplane on the outskirts of Marshall, Montana, takes more than just the lives of those on board. Two days later, a stranger appears at the home of the couple who watched the plane go down, saying only that he has come from Italy to begin his new life. He is the lone survivor of the disaster, although he mysteriously guards the secret. The stranger witnesses the disintegration of the couple’s marriage – the recent tragedy hastening its end – and befriends the husband, who is ever more adrift in the wake of his wife’s decision to leave.”

Another book that came home with me from London and has been hanging around for far too long. I like the look of it, but its moment never seems to come.

“‘I could never predict what was going to ruin me and what was going to rescue me.’ says Ilyana Meyerovitch, a self-confessed suicidal, strung-out Jew. Into her life, and her flat, walks her opposite – Susie Lyons – blonde, artistic, optimistic and above all, innocent. Like Being Killed is about the devastating effects the two women have on each other as they start to share more than a flat. Simultaneously drawn to Susie’s wholesome values and repelled, Ilyana’s desire for what Susie has will take her into the grip of a downward spiral whose only outcome is oblivion.”

Another London book that came home. I think I must have pulled out a few from the same box in the attic. Now I look at it again it seems much too dark for me, but it is a Virago V (one of a series of modern books by new authors published by Virago), and that suggests a certain quality.

The Greatest Gift by Danny Leigh

“A dazzling tale, told with great humour, of the last seconds of a man’s life as he leaps from a nine-storey building. Matthew Viss works for the city’s premier concierge service. Whatever you need, he can provide. And he’ll do it with a smile. He just wants to help – that’s all he’s ever wanted to do. The Greatest Gift is the story of his downfall.”

Another London book from another shop in Charing Cross Road. Blackwells this time, and I recall buying it as part of a three for two offer. The cover called me and a very short synopsis intrigued me.

“Art, fashion, fame and sex – artist Esther Glass has it all. That is, until a ghost from her past threatens to destroy her perfect life. Trying to cover her tracks, Esther goes for ultimate sensation, selling herself as a living work of art. She takes the international art scene by storm, performing as the female sitters inside seven great paintings. But underneath the surface the cracks start to show as Esther is forced to reconcile a very private history with a very public life.”

I blame my dog for this one. In the winter when it’s too dark to go to the park or the beach in the evening I sometimes walk her up through the town. She sniffs the catering establishments and I gaze into the windows of bookshops and wool shops. I kept seeing this book in the same spot and I loved the cover, so eventually I visited in opening hours, took a closer look and bought a copy.

The Oxford Murders by Guillermo Martinez

“On a balmy summer’s day in Oxford an old lady who once helped decipher the Enigma Code is killed. After receiving a cryptic anonymous note containing only the address and the symbol of a circle, Arthur Seldom, a leading mathematician, arrives to find the body. Then follow more murders – an elderly man on a life-support machine is found dead with needle marks in this throat; the percussionist of an orchestra at a concert at Blenheim Palace dies before the audience’s very eyes – seemingly unconnected except for notes appearing in the maths department, for the attention of Seldom. Why is he being targeted as the recipient of these coded messages? All he can conjecture is that it might relate to his latest book, an unexpected bestseller about serial killers and the parallels between investigations into their crimes and certain mathematical theorems. It is left to Seldom and a postgraduate mathematics student to work out the key to the series of symbols before the killer strikes again.”

Another charity shop bargain. I love mysteries and I love maths, so this seemed perfect.

And that’s it for this batch. Any thoughts?